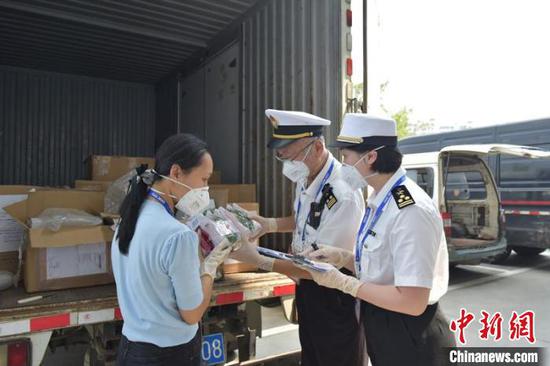 (ECNS) -- Exhibits from Regional Comprehensive Economic Partnership (RCEP) countries have been gathered at the 19th China-ASEAN Expo to be held on Friday in Nanning, Guangxi Zhuang Autonomous Region.

A batch of exhibits from Berlin, capital of Germany as well as its sister city Nanning, has arrived at Nanning International Convention and Exhibition center on Wednesday, which means the 19th China-ASEAN Expo is ready to commence.

The Expo covers an area of 102 thousand square meters with 5,400 booths planned in total. Overseas exhibitions account for 30 percent of the total area, which has returned to the pre-pandemic level, with exhibits from nearly 40 countries including 10 ASEAN and all RCEP members.

In order to achieve quick customs clearance of foreign exhibits, Nanning Customs has adopted the declaration system for temporary inbound and outbound goods, enabling all the links to be finished online, greatly improving customs clearance efficiency.

As for exhibits from RCEP members like Japan, which came to China by air and mail, Nanning Customs have established an assistance supervision mechanism with customs offices in Guangzhou, Shenzhen and Kunming to ensure the rapid customs clearance of exhibits.

This year's imported exhibits mainly include food and cosmetics of ASEAN countries, over double that of last year, with the number of exhibits having reached a record high since the COVID-19 outbreak, said Yang Kai, a local customs official.