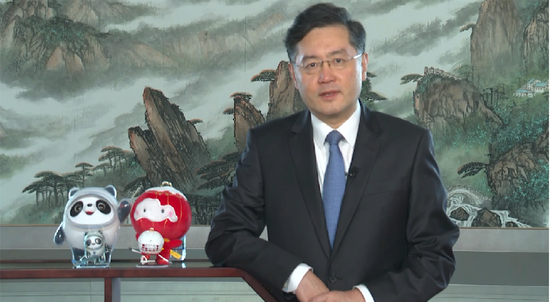 Ambassador Qin shared with the audience the preparation work for the Beijing Winter Olympics and wished Chinese and U.S. ice hockey teams best of luck in the Games.

Over 18,000 American spectators watched the game. When the game was about to end, the in-game host announced the broadcasting of Ambassador Qin’s remarks which were aired on the video screen above the ice rink. In his remarks, Ambassador Qin greeted all the fans present and quoted famous American ice hockey player Mario Lemieus in saying, every day is a wonderful day for ice hockey. I wish to thank players of both teams for making today a great day. People love ice hockey because of its speed and skills. Hockey players have fire in their hearts and ice in their veins. People love it also because it reflects the sportsmanship of mutual respect, fair play and tenacity.

Ambassador Qin said, in less than one month’s time, Beijing Winter Olympics will open. Chinese and U.S. Men’s Ice Hockey Teams will compete in the same group in Beijing.

"I wish to draw your attention here, Beijing Winter Olympics will use the most advanced ice-making technology in the world, with zero carbon emissions. But I hope there will be plenty of goals for both Chinese and U.S. teams, and I wish them good luck," Qin said.

At the end, Ambassador Qin expressed humorously with a pun: as COVID-19 is still spreading, let’s all learn from the players on the rink — they always wear face masks! During the game break, Slapshot, mascot of Washington Capitals, tossed Chinese Spring Festival Tiger mascot dolls to the fans, arousing cheers and ovations from the audience.

With this event, the Chinese Embassy in the U.S. participated in the “Together for a Shared Future” special media action of CGTN American. Shen Haixiong, President and Editor-in-Chief of China Media Group, delivered to American fans video remarks on the high-speed rail to the Beijing Winter Olympics venues. He asked everyone to enjoy the passion and happiness brought by sports together and extended best wishes for the new year to everyone.