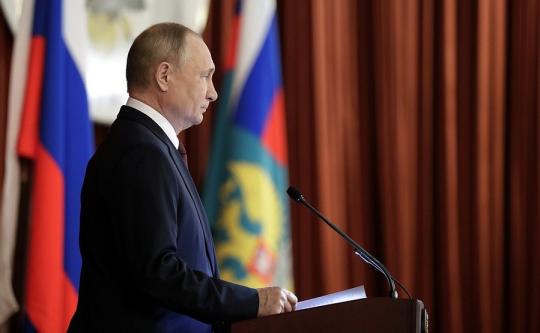 Russian President Vladimir Putin addresses an expanded meeting of the Russian Foreign Ministry Board in Moscow on Nov 18, 2021. （Photo/Xinhua）

Russian President Vladimir Putin has happily accepted President Xi Jinping's invitation to come to China for the Beijing Winter Olympics, and the two countries are in close communication over details of the visit, Foreign Ministry spokesman Zhao Lijian said on Tuesday.

"We believe that this will, once again, show the partnership between China and Russia that hopes for the best for each other," Zhao said, adding that the two countries have a good tradition of celebrating major events together, in reference to President Xi's attendance at the Sochi Winter Olympics in 2014 upon Putin's invitation.

"We hope and we are convinced that athletes from our two countries will set new records, and we will make a contribution to delivering streamlined, safe and splendid Olympic Games to the world," Zhao told reporters at a regular news briefing in Beijing.

The spokesman also expressed China's opposition to the sailing of a US guided-missile destroyer through the Taiwan Straits on Tuesday, saying that the United States should immediately correct its mistake.

Recently, US warships have many times deliberately interfered with and undermined regional peace and stability and stirred up trouble based on so-called freedom of navigation, Zhao said, adding that the international community is clearly aware of this.

"The US side should stop making provocations and challenging the bottom line and stop playing with fire," he said, urging Washington to play a constructive role for regional peace and stability.

Senior Colonel Shi Yi, a spokesman for the theater command, said in a statement that it had dispatched naval and air forces to follow and monitor the voyage of the guided-missile destroyer USS Milius.

The command troops will take all necessary measures to resolutely counter all threats and provocations, and firmly safeguard national sovereignty and territorial integrity, Shi said.