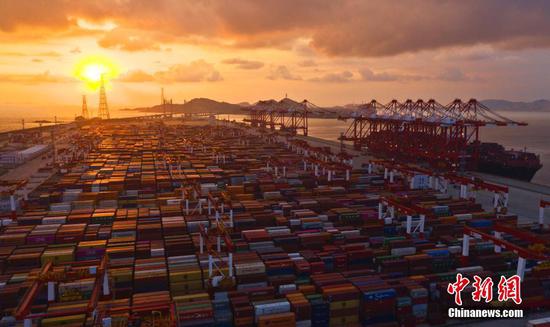 (ECNS) -- China has outlined major tasks and a timetable in developing green, intelligent and sustainable ports, according to a guideline released by the Ministry of Transport and other central government departments on Wednesday.

With 19 key tasks in six areas identified, China's major ports will make breakthroughs in pursuing "green, smart and safe” development by 2025, with several world-class port clusters to be built by 2050, the guideline stated.

Efforts will be made to reduce pollution and increase use of green energy to improve conservation and ecological protection at ports. A robust management and operation system supported by comprehensive facilities to cut pollution is planned to come into force in 2025, setting China's major ports on the path to reaching the world's top level in terms of green development indicators by 2035.

China will make full use of technological advances and industrial transformation to turn ports intelligent by 2035, such as the logistics and advanced connections between port and vehicles.