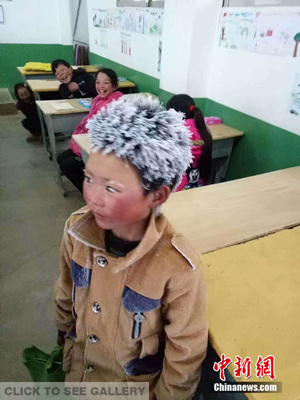 A third-grade boy at Zhuanshanbao Elementary School in Xinjie Town, Zhaotong City of Yunnan Province arrives at a classroom with his hair and eyebrows fully covered with frost. (Photo provided to China News Service)

(ECNS) -- A picture of a boy arriving at a classroom with his hair and eyebrows fully covered with frost went viral on the Chinese Internet.

A third-grader at Zhuanshanbao Elementary School in Xinjie Town, Ludian County of Zhaotong City, Yunnan Province, the boy's home is 4.5 kilometers from the school so he usually needs to walk over an hour to attend classes, according to school headmaster Fu Heng.

In the picture, the boy has a red face from the low temperatures and apparently did not wear enough clothes to keep warm. He stood alone with his white hair and eyebrows while other classmates behind were clearly amused and laughing.

His teacher took the picture on Monday and then sent it to the school headmaster. For reasons unknown, the picture was released on the Internet and caused a sensation.

It was minus 9 degrees centigrade in the morning and also the first day for the end-of-term exam, said Fu. After arriving at the classroom, the boy made a face that sent his classmates into peals of laughter.

Fu said the boy's parents work in other cities and he lives with siblings. The school provides breakfast and lunch for students but the classrooms have no heating supply.

Many Weibo users have expressed their support to the boy. User @Hedgehog-qian said "the hardships you endure will shine on the path ahead." Another user @qwedfgvbn123098 said, "study hard to change your fate."