Airbus anticipates A321 assembly at Tianjin facility later this year 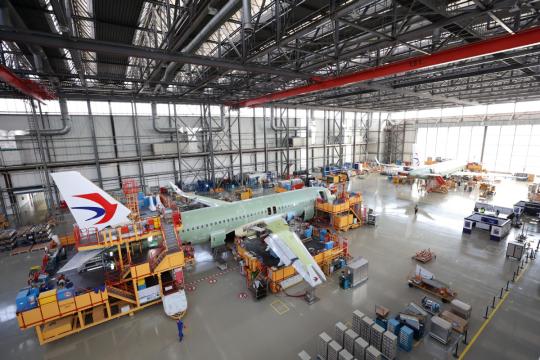 The assembly line of the Airbus A320 family of aircraft in Tianjin. (Photo/Xinhua)

European aircraft manufacturer Airbus plans to start to assemble A321 single-aisle aircraft at its final assembly line in Tianjin later this year, and it is looking to seek more cooperation opportunities with Chinese aviation industry players.

The first batch of two large parts, a nose and a fuselage, arrived in Tianjin Port from Hamburg, Germany, on Saturday, and the large sections are expected to be transported to Airbus' final assembly center in Tianjin on Tuesday.

The A321, the biggest member of the A320 family, now serves as Airbus' single-aisle aircraft with the strongest demand globally. Each A321 can hold about 30 percent more passengers than the A320 for typical cabin configuration, and its extra-long-range version is capable of flying up to 8,700 kilometers, Airbus said.

Worldwide, Airbus has four A320 family assembly facilities in Toulouse, France; Hamburg; Alabama in the United States and Tianjin. The aircraft manufacturer has expanded its capacity at all these facilities to meet growing demand for the A321, it said.

"The whole company of Airbus has shifted from dealing with the COVID-19 pandemic to considering future growth. We will focus on digital and green development transformation, and continue to explore new cooperation possibilities with Chinese aviation industry partners," said George Xu, executive vice-president of Airbus and CEO for Airbus China.

The two large portions of the A321, which were carried by a cargo ship owned by Hong Kong, arrived at Pacific International Container Terminal of Tianjin Port on Saturday afternoon.

"It was the first batch of large parts of the A321 that arrived in Tianjin since the establishment of the A320 family assembly facility in Tianjin more than a decade ago," said Zhao Zhiming, deputy general manager of the engineering logistics supply chain company in Tianjin of China COSCO Shipping Co Ltd.

By the end of 2021, at its final assembly line in Tianjin for the A320 family aircraft, Airbus had delivered 555 A320 aircraft to Chinese and Asian customers. By the end of this year, Airbus plans to deliver its 600th A320-series aircraft and the first A321 aircraft assembled in Tianjin, it said.

Last year, Airbus introduced about 100 technicians from Europe to China, and it will continue to increase investment in China after the company canceled some projects elsewhere due to the pandemic.

Thanks to close cooperation with Chinese partners, Airbus has lifted its market share in China to 53 percent, outpacing rival Boeing Co.

"The further investment and extension of assembly capability of Airbus in Tianjin shows its recognition of China's investment environment and its confidence in the growth potential of the civil aviation market in China," said Zou Jianjun, a professor at the Civil Aviation Management Institute of China.

Meanwhile, the Boeing 737 Max, which has been grounded for more than two years after two fatal crashes, is waiting to resume flying again in China after it regained an airworthiness directive from the Civil Aviation Administration of China in December.