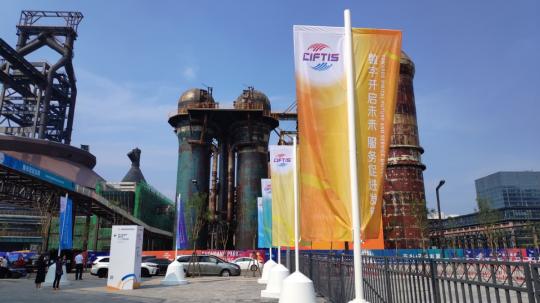 The flags of the 2021 China International Fair for Trade in Services are seen at Shougang Industrial Park in Beijing on Sept 3, 2021. (Photo by Sun Chi/chinadaily.com.cn)

China's trade in services is expected to maintain robust growth in the second half as business activity continues to expand, further fueling the country's economic recovery, said analysts and business executives on Thursday.

Their comments came as the Ministry of Commerce announced on Wednesday that the value of China's trade-in services jumped 21.6 percent on a yearly basis to 2.89 trillion yuan ($427.72 billion) in the January-June period.

In contrast to trade-in goods, trade-in services refers to the sale and delivery of intangible services including transportation, tourism, telecommunications, construction, advertising, computing and accounting.

With China further opening its sprawling services sector and following the implementation of the Regional Comprehensive Economic Partnership agreement at the beginning of the year, trade in services will be a key driving force for the country to sustain its economy and cultivate fresh competitive advantages in the coming years, said Zhang Wei, chief researcher of the Beijing-based China Association of Trade-in Services.

Apart from facilitating goods trade, RCEP members have pledged to gradually open more than 100 services sectors to trade, including finance, telecommunications, transportation, tourism and research and development, with a six-year transitional period, Zhang said, adding that there has also been mutual recognition of professional qualifications, with obligations and frameworks for increased cooperation between signatory countries.

"This broadened access will usher in greater development opportunities for RCEP members to further their trading openness in services, especially in areas such as cross-border e-commerce, online education, business exhibitions and healthcare consulting services," said Feng Yaoxiang, director of the trade and investment promotion department at the China Council for the Promotion of International Trade in Beijing.

China's services exports expanded 24.6 percent year-on-year to 1.41 trillion yuan between January and June, while services imports amounted to 1.49 trillion yuan, up 18.9 percent from a year ago, said the Ministry of Commerce.

The growth of services exports was 5.7 percentage points higher than that of services imports, driving the services trade deficit down 34.3 percent to 79.19 billion yuan.

China's trade of knowledge-intensive services maintained steady growth during the six-month period, rising 9.8 percent year-on-year to about 1.21 trillion yuan. Sectors such as telecommunications and information services saw rapid increases in exports, while insurance services were among the fastest-growing areas for such imports.

Empowered by digital and telecommunication technologies, China's trade-in services has shown strong development resilience in recent years, particularly in knowledge-intensive areas. This form of trade has become a new engine for the nation's foreign trade growth, said Li Jun, director of the institute of international trade in services under the Beijing-based Chinese Academy of International Trade and Economic Cooperation.

Vianne Cai, head of marketing solutions at LinkedIn China, said a growing number of Chinese companies in the fields of technology and intelligent manufacturing are ratcheting up efforts to expand business activity across the world, especially in emerging markets such as South America and the Middle East.

Chinese companies engaged in software, telecommunications and database management, as well as intelligent manufacturing enterprises, have witnessed the fastest growth in overseas expansion, she added.

"The move is driven by the stay-at-home economy and improved telecommunication networks in many parts of the world," said Li Ping, the company's CEO.