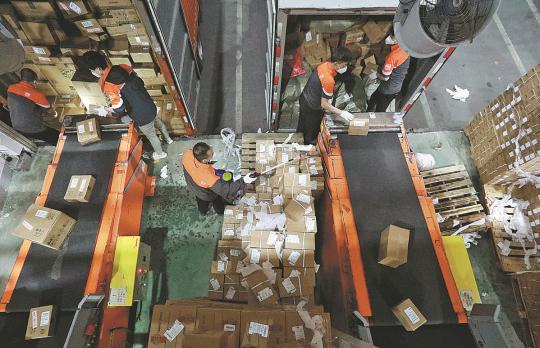 The daily average volume of parcel collection and delivery in Shanghai has risen to more than 1 million, one-sixth the city's normal level before it adopted citywide epidemic control measures in April, an official with the Shanghai Postal Administration said on Thursday.

Distribution centers of 16 out of the 21 postal and express delivery enterprises on the city's business resumption white list have resumed operations, and those of the others will be put into operation soon, Yu Hongwei, deputy director of the administration, said at a news briefing.

The 21 enterprises on the white list released on Sunday include China Post, SF Express, Cainiao, UPS and FedEx.

He said more than 15,000 digital road permits for couriers and vehicles have been issued, and that the authority will publish the second white list for postal and express delivery enterprises soon to further boost courier capacity.

In addition to carrying out strict epidemic prevention measures for couriers and vehicles, he said rigorous steps are being made to disinfect parcels entering and leaving Shanghai.

For example, all parcels must undergo disinfection at distribution centers and be disinfected thoroughly again after arrival at terminal outlets. A notice of disinfection sticker must be put on parcels sent to regions outside Shanghai, and they must be placed at transfer sites for 24 hours before leaving the city.

All international parcels must be disinfected at their first port of entry and be kept at terminal outlets for a period of time before they are delivered to their recipients.

"For the next phase, we'll help more enterprises, while sticking to epidemic prevention and control protocols, and resume personalized parcel services as soon as possible to provide more convenience for residents," Yu said.

Qian Changyin, a manager at the Shanghai distribution center of STO Express, said that it resumed operations on May 1 with more than 500 workers, and all the hundreds of thousands of parcels suspended at the center before the city's lockdown have all been delivered.

"Our current amount of work is rising on a daily basis. The number of parcels collected and delivered daily is about one-third of our usual business volume," said Qian.

"We believe that with the orderly resumption of the terminal network, consumers will soon be able to send and receive parcels normally," he said.

Monitoring processes and epidemic control workers are being used in each procedure of the multilink courier service to ensure precise and thorough disinfection, said Qian.

"With the joint efforts of all parties, we've seen the daily tally of new infections in the city decline, and the risk of the virus spreading has effectively come under control," said Zhao Dandan, deputy director of the Shanghai Health Commission.

"However, we must be aware that the results are not yet secured, and strict epidemic control measures must continue in key risk areas, such as dilapidated neighborhoods and villages," he said.

As of Wednesday, there were 349 people severely ill with COVID-19 and another 61 in critical condition receiving medical treatment in Shanghai.