Ever Given leaves Suez Canal after settlement contract signed 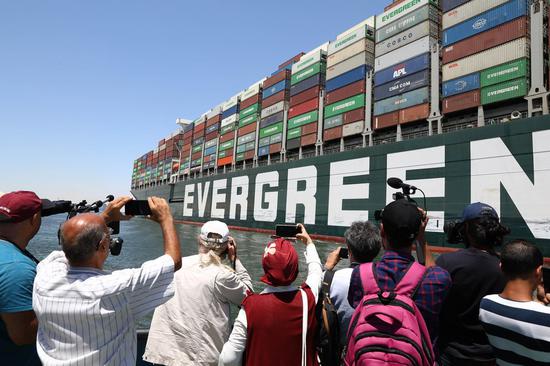 People take photos of the Ever Given container ship sailing on the Suez Canal in Ismailia Province, Egypt, on July 7, 2021. (Xinhua/Ahmed Gomaa)

The Ever Given container ship which blocked the Suez Canal for nearly a week in March began its journey out of the canal on Wednesday, said Suez Canal Authority (SCA) Chairman Osama Rabie.

The SCA has held the giant ship in a lake between two stretches of the waterway since it was re-floated on March 29, as the dispute over requested compensation by the SCA was not settled.

"The Japanese-owned Ever Given has signed the settlement contract with the SCA and the cargo vessel started to sail to Rotterdam in the Netherlands and then to Felixstowe in England," said Rabei in a press conference.

He said that negotiations were difficult but all sides were willing to reach a deal, without giving any details about the exact amount of compensation.

Rabei added that the canal will receive a tug boat with a pulling capacity of about 75 tons as part of the settlement contract.

He explained that the ship blockage of the waterway caused many problems in several ports around the world and resulted in negative impacts on the Suez Canal traffic.

"Egypt was keen on reaching a suitable settlement that ensures the SCA compensation along with preserving good relations with the ship's owner, operator and insurer company," Rabei said.

On May 25, Egypt offered to cut its compensation claim down from 916 million U.S. dollars to 550 million dollars against the impounded vessel after the SCA obtained the estimated financial value of the goods on the ship.

The canal earned revenue of 3 billion dollars in the first six months of 2021, up by 8.8 percent compared with the same period last year, despite the Ever Given accident, Rabie said.

Linking the Red Sea and the Mediterranean Sea, the Suez Canal lost 12-15 million dollars in daily revenues during the blockage, according to statistics of the canal authority.