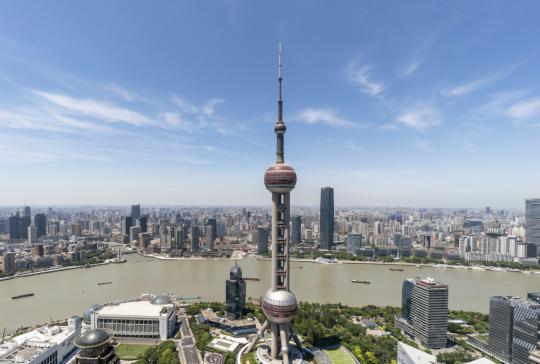 The Lujiazui area of Shanghai has developed into a financial hub during the past three decades. [Photo by Wang Gang/for China Daily]

Despite lingering uncertainties about the COVID-19 pandemic, nearly 75 percent of the companies from the United States remain optimistic on expanding their operations and earning profits in China over the next two years, the American Chamber of Commerce in China said on Tuesday.

Though the growth rates of many U.S. companies had slowed due to the pandemic and the China-U.S. economic and trade tensions, nearly 26 percent of the AmCham members reported higher earnings before interest and tax margins in China vis-a-vis their global operations, according to the chamber's annual business climate survey.

The study said that foreign companies in China remained positive on the business outlook, largely due to the Chinese government's early and stringent response to the pandemic, an improving investment environment, and anticipation of a more predictable policy environment.

About 57 percent of the U.S. companies expressed optimism about their profitability potential, partly due to the speed of China's anti-pandemic economic recovery.

"With China leading in economic recovery and the new U.S. administration in place, our members are cautiously optimistic regarding business growth in China, with nearly half of them hopeful that the bilateral relationship will improve," said AmCham China Chairman Greg Gilligan.

Despite widespread reports of pandemic-fueled supply chain disruptions and bilateral trade tension inspired reviews of risks and vulnerabilities, the survey results do not indicate a major shift in members' manufacturing and sourcing outside of China, with about 83 percent of the respondents indicating that their existing manufacturing and sourcing will remain in China.

"China has continued to deepen reform and opening-up, creating a fairer and better business environment for multinational companies operating in China, prompting us to import more agricultural products and solutions into the country faster," said Leo Liu, president for the Asia-Pacific region at Archer Daniels Midland Co, or ADM, a U.S.-based grain trader and processor.

Eager to further diversify its business scope in the country, Liu said the group is looking for opportunities to acquire high-quality nutrition and healthcare businesses in China as the contagion has further stimulated the market demand in this specific area. ADM plans to double the proportion of its nutrition and healthcare operations in China during the 14th Five-Year Plan period (2021-25).

AmCham China said that its members are still largely committed to the China market, with about 61 percent of the respondents considering China as a priority investment destination. They remained hopeful that the Chinese government would further open its markets to foreign investment.

U.S. companies continue to see business opportunities in China not only in areas such as the going global move of Chinese companies and growth in domestic consumption, but also in new areas such as the country's leading-edge adoption of new digital technologies, according to the study.

Ding Yifan, a senior research fellow at the Institute of World Development at the Development Research Center of the State Council, said China's continuous opening-up, improved business environment, and most of all, its determination to expand domestic market, are all encouraging multinationals seeking more business opportunities in China.

He said the implementation of China's policy measures to further open up and improve business environment, such as the formulation of negative lists, should be strengthened, so as to further ease market entry for foreign investors and make bigger contributions to global economic recovery.