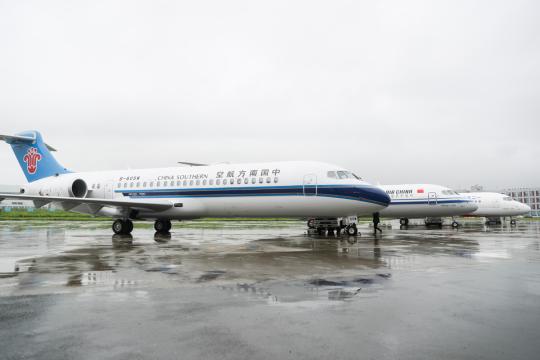 A China Southern Airlines ARJ21 aircraft is parked at the Commercial Aircraft Corporation of China Ltd, on June 28, 2020. （Photi/Xinhua）

The successful maiden flight of ARJ21 aircraft demonstrates the first domestic-made aircraft of China Southern Airlines has officially started commercial operations, according to a statement from the airline, the largest by fleet size in Asia.

China Southern Airlines plans to form a fleet of 35 ARJ21 aircraft by 2024, operating in major branch lines on the Chinese mainland.

Tickets for the ARJ21's first flight were sold out in several days after going on sale June 18.

More than 70 percent of tickets for Flight CZ3898 between Thursday and Saturday were sold by Wednesday, demonstrating the appeal of the domestic-made aircraft to the Chinese people.

"Ticket sales and occupancy of ARJ21 is much faster and higher than other branch air routes operated by other aircraft," the statement read.

To better serve passengers, China Southern Airlines opened a special counter in the airport for ARJ21 passengers to check in, fill in health forms and check luggage on Wednesday.

Special airline ground crew were arranged to help guide passengers to board and introduce the plane.

The ARJ21 is a new type of turbofan regional aircraft developed by China, with independent intellectual property rights.