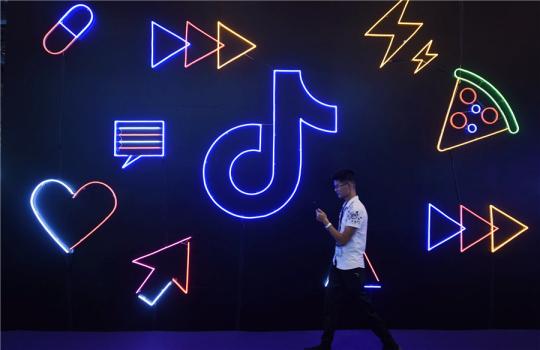 A visitor walks past the booth of Douyin during an industry expo in Hangzhou, capital of Zhejiang Province. (Photo by Long Wei/For China Daily)

Short video applications are not only flourishing in China, but gaining more strength as people across various age groups and geographical locations are using them to kill time, record lives, and even make a fortune.

Douyin, the most popular short video app in the country, said on Monday that the number of daily active users on its app had risen to 400 million by January. That represented a whopping rise from the 250 million recorded during the same period a year ago, according to an annual report summarizing the app's highlights in 2019. Such an achievement is phenomenal, considering that the app made its debut in 2016.

At first glance, it would be would be easy to assume that Douyin is largely used by the trendy and savvy Generation Z customers. Not exactly, say the experts, adding that Douyin is also an integral part of virtual family get-togethers. The company said some 3.08 million parental-themed issues were shot and uploaded on Douyin last year, whereas 460,000 families have utilized Douyin for recording family portraits.

People of virtually all ages are glued to the app, and they double as both viewers and content curators, the company said. For instance, those in their 50s were more keen on creating dance-related videos and enjoyed watching video clips on wedding scenes.