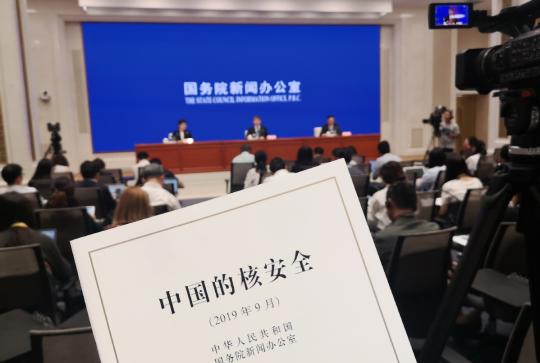 The country's first white paper on nuclear safety is published on Tuesday at a news conference by the State Council Information Office in Beijing. (WANG ZHUANGFEI/CHINA DAILY)

In mid-August, the U.S. added China General Nuclear Power Corp, China's largest State-owned nuclear company, and several of its subsidiaries to its Entity List, barring U.S. companies from selling products to those companies.

Liu Hua, head of the National Nuclear Safety Administration, said the U.S. had abused the concepts of national security and export control measures, which had harmed nuclear-related Chinese and U.S. companies alike.

"China resolutely opposes the U.S. using unilateralism and protectionist policies to damage the interests of China and other nations," he said. "China hopes the U.S. will stop the erroneous actions and solve issues through fair and equal negotiations."

However, Liu said the "pleasant, friendly and constructive" cooperation in nuclear safety between China and the U.S. for the past 35 years is likely to continue despite the current trade disputes between the two countries.

He said China-U.S. nuclear cooperation had been mutually beneficial.

"Both nations are major nuclear powers that have a complete nuclear industry system," Liu said.

Liu made these remarks at a news conference on the country's first comprehensive white paper on nuclear safety.

The paper was published on Tuesday by the State Council Information Office.

Liu said China has placed strong emphasis on nuclear safety since building its first nuclear power plant in 1985 and has maintained a good track record of nuclear safety.

As of June, there are 47 nuclear power facilities in operation on the Chinese mainland, and China is building 11 new facilities, according to the white paper. China is the world's third-largest nuclear energy nation, with the highest number of new reactors under construction.

Liu said the total operating hours of all Chinese nuclear facilities have surpassed 300 years, and there have been no incidents or accidents at or above Level 2 of the International Nuclear and Radiological Event Scale (INES). The lowest level is zero, with no safety significance, and the highest level is seven.

"Even Level 1 incidents in China are very rare," Liu said. INES Level 1 generally consists of incidents that breached operating limits at a nuclear facility, while Level 7 is characterized with external release of radioactive material that could have widespread health and environmental effects, such as Chernobyl in 1986 and Fukushima in 2011.

According to recent rankings by the World Association of Nuclear Operators, more than 80 percent of safety indicators from Chinese nuclear power facilities have surpassed the world's average, and more than 70 percent of these indicators are world-class level, the white paper stated.

The International Atomic Energy Agency has thoroughly inspected China's nuclear safety system four times since 2000, and its verdict has been positive, calling the system reliable and effective, he added.