Tesla eyes production by year-end on its Shanghai Gigafactory 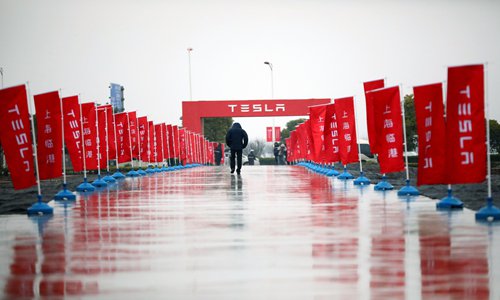 The path to the Tesla site in Shanghai is lined with banners on Monday. (Photo: Yang Hui/GT)

U.S.-based electric vehicle producer Tesla Inc began construction on Monday on its so-called Gigafactory in Shanghai, the company's first outside the U.S. and the municipality's biggest foreign-invested manufacturing project in history.

"We're looking forward to hopefully having some initial production of the Model 3 toward the end of this year and achieving volume production next year," said Tesla CEO Elon Musk, who capped the groundbreaking ceremony with a brisk dance in Shanghai's Lingang industrial zone.

Appearing to address concerns over the plant's delivery schedule, Musk said he hoped the company could bank on the incredible resources of Shanghai, which has the biggest subway system in the world, and build the Gigafactory in record time.

"This would arguably be one of the most advanced factories in the world of any kind," he said.

The plant will initially roll out 3,000 Model 3 per week, the company said in a statement sent to the Global Times  Monday. Such a capacity is set to reach 500,000 units annually as the plant functions completely.

Tesla also presented Model S, Model X and Model 3 on the site of the factory.

An employee of Tesla told the Global Times on Monday at the Gigafactory that Tesla is planning to complete its first production line by the end of this year for production of Model 3.

Analysts noted on Monday that Tesla's Gigafactory presence in China, the world's largest automotive market and one of the key proponents of new-energy vehicles, is of great importance to the company. But the company also faces great challenges as previous negotiations delayed the plant investment by about three years.

Yu Fenghui, a Beijing-based independent economist, told the Global Times on Monday that the Tesla Gigafactory is a milestone in China's foreign investment, as the plant is wholly owned by the U.S.-based electric car manufacturer.

"Next year will be a policy watershed year. Tesla's capacity to achieve mass production by then is unknown. It has to be ready to compete head-to-head in its market segment with all-electric models developed by traditional carmakers such as German and Japanese brands," said Zeng Zhiling, an analyst at Shanghai-based consultancy LMC Automotives.

China will implement more stringent fuel standards and a quota system that will compel many automakers to roll out new-energy models.

Tesla is betting on the $2 billion Gigafactory in Shanghai to expand its footprint in the world's largest market, where it's already facing strong competition from Chinese and other foreign carmakers eager to tap into the rapidly rising electric vehicle segment.

The company is also facing sharp sales drops in the Chinese market due to the rising competition and tariffs stemming from the trade war between China and the U.S..

In the longer term, Tesla must achieve localization in terms of both technology and materials. It's unrealistic for the company to import all of its parts from the U.S.. It must eventually use the supply chain in China, although this will be a gradual process. Using made-in-Japan parts can be a temporary solution as Japan is geographically close to China, Yu said.

Tesla's sales in China plunged 70 percent year-on-year to just 211 vehicles in October, according to media reports that cited statistics from the China Association of Automobile Manufacturers.