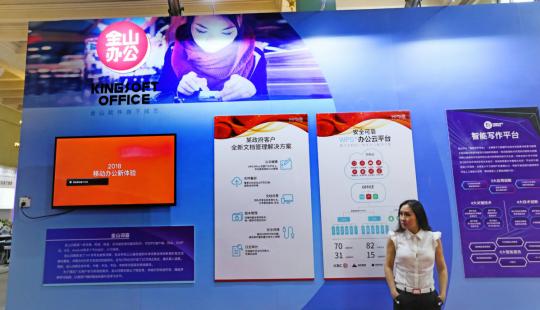 A visitor stands next to a Kingsoft billboard during an exhibition in Beijing. (Photo by A Jing / For China Daily)

China's ceaseless efforts to protect intellectual property rights have quickened after witnessing the fast development of software industry both at home and abroad, a company executive said.

"In the old days when software was stored on floppy disks or CDs, counterfeit products were widespread. It greatly crimped the margins of many companies. The entire industry shrank, and many exited the sector," Ge said in a recent interview.

Ge cited the country's amendment to the Copyright Law and introduction of the Regulation on Computers Software Protection in 2011 as a major step in combating software piracy.

"Due to the improved IPR protection environment, our company can focus on innovation. Globally, the mobile monthly active users of WPS Office, an office suite, has tripled from that of three years ago," Ge said.

The advancement of IPR protection has also facilitated the software industry in expanding overseas, including economies participating in the Belt and Road Initiative, he said.

Currently, WPS Office has over 300 million monthly average users. Out of those, about 20 to 23.3 percent are from overseas, an increasing trend, according to Ge.

For decades, China has been beefing up its efforts to improve IPR protection. The government has made the task a priority and the measures it has taken have proved effective.

The country ranked 17th in terms of the "most innovative economies" in the annual Global Innovation Index released in July by the World Intellectual Property Organization and Cornell University in the United States. Last year, China moved up to second place in terms of international patent applications, with about 51,000 applications submitted.

"IPR protection is key to innovation-driven development and international trade, which also plays an indispensable role in the country's opening-up," Shen said at the 2018 China Patent Annual Conference in Beijing.

Official data showed that China's software industry has registered rapid revenue growth. The sector's business revenue stood at 5.5 trillion yuan (about $875 billion) in 2017, 1.2 times higher than the 2012 level, according to the Ministry of Industry and Information Technology.

In the first three quarters of this year, profits of the industry climbed by 14.4 percent to 568.9 billion yuan, the ministry said.

Ge said the company will continue to innovate its technologies, and incorporate Chinese cultural elements into the products.

"No matter how the market changes, we have not forgotten from where we started. We will devote ourselves to our core business, stay future-minded, and create long-term value for our clients," Ge said.