Americans refuse to live a 'life of tariffs' 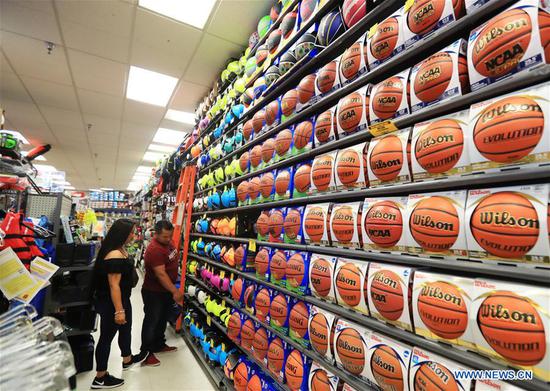 To make her case, Quach, a retail industry representative, brought a basket of supermarket shelf items, and walked the 301 committee through "a day in the life of tariffs."

If enacted, the tariffs "will cut into the budgets of American families, especially lower- and middle-income families who can ill afford to pay more for everyday consumer goods," she said.

Quach is among the over 300 business owners and representatives of industrial associations who attended public hearings held by the Office of the United States Trade Representative (USTR) regarding proposed tariffs on approximately 200 billion U.S. dollars of Chinese products.

In an overwhelming message, hundreds of witnesses from a wide range of sectors across the country urged the government to stop slapping tariffs on Chinese imports, which are important for U.S. businesses, employment and consumers.

Since the United States initiated trade tensions with China, Quach has repeatedly appeared at tariff hearings on behalf of over 200 U.S. leading retailers, including household brands such as Walmart, Best Buy and Costco.

This time, she aims to persuade the 301 committee to approve the exclusion of over 650 categories of products from the tariffs list.

Together in this are U.S. bicycle suppliers, who are also feeling the chill of the tariff threats.

"Do you remember how exciting it was to get your first bicycle?" asked Bob Margevicius, who's on the board of directors of the U.S. Bicycle Product Suppliers Association. "It was more than just metal and two wheels, it was a source of freedom, and an entry point to adulthood."

"This is at risk today," said Margevicius. "I'm testifying to preserve this simple pleasure from becoming collateral damage in a trade dispute."

According to figures compiled by the association, the country buys about 15 million complete bicycles, or roughly 94 percent of its total purchase, from China, worth over 1.1 billion dollars annually.

Margevicius feared a devastating blow would be dealt to U.S. bicycle suppliers, as the proposed tariffs would apply to the entire 1.5 billion dollars of complete bicycles, bicycle components and safety accessories.

According to a recently-released study by the U.S. National Retail Federation, if the 25-percent additional tariffs are slapped on Chinese-made furniture and travel goods, American consumers will pay an extra 6 billion dollars each year.

Besides pointing out the extra financial burden on consumers, Americans outlined how the measure would hit American companies and lead to layoffs.

John McCann, who represented MEC Aerial Work Platforms, presented one of the most moving testimonies. His California-based manufacturing company makes scissor lifts and boom lifts used in construction and maintenance for a U.S. market worth about 2.6 billion dollars.

He shared several stories. One was about a woman who had never had a full-time job before. But after her husband went to prison, she came to work at MEC. She started by attaching connectors to the ends of wire and cable and rose to become the head of the wire department.

"She proudly tells me she's no longer on welfare, food stamps... and how grateful she is to be able to support her family," McCann said.

Another story was about a young man who was one of five siblings raised in a family of drug abusers. He left home at 14 and lived intermittently with friends or relatives, having no skills or work experience.

"We trained him to operate a forklift. He rose to head a five-man team and now has his own apartment," McCann said.

"The terms used to discuss international trade say nothing about the lives of these men and women who get up every morning to go to work," he said. "Tariffs will cause layoffs. (Lives) will be devastated. The hope and optimism that comes from many of our employees will be gone."

For many employees, MEC is the best job they have ever had, he said. "Those are good American jobs in a small rural community."

Mutual investment and trade cooperation between China and the United States have helped add millions of U.S. jobs, according to a recent report from the U.S.-China Business Council.

U.S. Senator Dan Sullivan of Alaska also came to testify before the 301 committee. The fishermen in his constituency are baffled by the purpose of the proposed tariffs.

Sullivan said the 900 million dollars of seafood on the list are initially exported from Alaska, processed in China, and then imported by the United States to sell in its domestic and global market. A hike in the tariffs is nothing less than a bullet aimed at Alaskan fishermen.

According to the USTR, the proposed tariffs are a supplemental action in response to what it called China's unfair trade practices related to technology transfer, intellectual property, and innovation, based on findings in its investigation of China under Section 301 of the Trade Act of 1974, a one-sided tool that was created and honed during the Cold War era and has been banned by the World Trade Organization.

Mark Kinzie, director of Logitech, Inc., said there were no practices of forced technology transfer or intellectual property rights infringement by Chinese entities, drawing on his business experiences with Chinese counterparts. His views were widely shared by other representatives.

During the hearings, U.S. officials asked frequently if there's any source of imports that can replace China, if it's possible to reduce dependence on China as part of the supply chain or just simply "could you move production out of China?"

However, the one-sided idea was not well received. "Supply chains are not plug-and-play -- they cannot easily be reconfigured to meet the whims of U.S. trade policy," said Ed Brzytwa, director of international trade at the American Chemistry Council.

"Supply chains do not exist in a vacuum but move with the ebb and flow of market forces," Brzytwa said. "Forcing companies to reconfigure their supply chains would threaten the viability of their businesses."

Speakers representing various industries, including apparel, suitcases and bags, bicycles, semi-conductors and electronics, said that it would take years and a massive amount of capital to move production out of China, let alone moving it back to the United States, which has a high labor cost.

"There are no other more sophisticated supply chains than in China," said Mark Karnes, vice president of strategic planning with Cedar Electronics, the parent company for several automotive and consumer electronics brands.

"The dramatic increases in our product costs are making us less competitive...," Karnes said.

"Any claim that U.S. producers are capable of supplying the market with domestically produced products or those sourced from Korea, the EU (European Union) or anywhere else for that matter ignores economic reality and is simply wrong," said Harlan Stone, co-founder of the American Consumers & Workers Justice Coalition.

Naomi Wilson, director of global policy, China & Greater Asia for the Information Technology Industry Council, which represents companies including Amazon, Apple and Facebook, said the "most egregious long-term impact" of the proposed tariffs would be on "U.S. competitiveness and technological advantage."

"Many of the components on this list are building blocks of future technologies," Wilson said, noting that Internet of things, AI, machine learning, and 5G will all become more expensive.