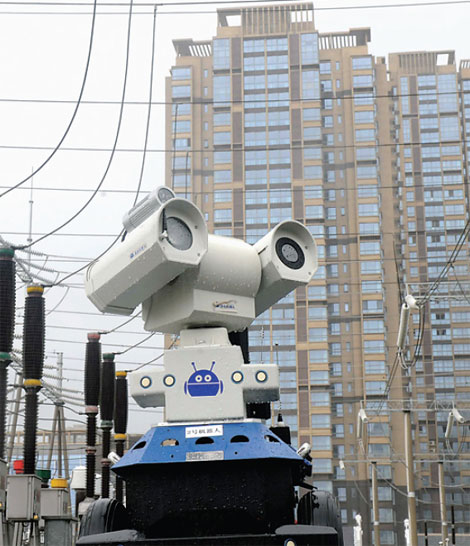 A robot monitors power-transmission equipment during a rainstorm in Chuzhou, Anhui province, on Aug 10, 2015. (Photo/China Daily)

One of the new entrants is HIT Robot Group, which was established in December 2014 with funding from a provincial government and the Harbin Institute of Technology, a Chinese university which was ranked 7th among the best global engineering universities by US News in 2015.

The elite university has done years of cutting-edge research into robots-it is the maker of China's first space robots and lunar vehicle.

For its part, the company is positioned to have a presence in a wide range of areas, from robot components, industrial robots, service robots to automated equipment for nuclear power plants and aerospace industries.

"We have arguably the best robot engineers and researchers in China, which can give us an unparalleled advantage," wrote Han Jiecai, honorary chairman of HIT Robot and vice president of the Harbin Institute of Technology, in a bylined article in the Economic Observer.

But despite the efforts by leading Chinese robot manufacturers to build a premium brand, most players are still locked in low-end competition, experts said.

"Though the domestic scientific community has been researching robots for many years, the robot industry is still in its infancy," said Hao Yucheng, deputy director of the China Robot Industry Alliance.

"The bulk of enterprises have no intellectual properties, talents, and cash. They are just entering the sector with enthusiasm and doing repetitive jobs like assembling robots instead of making robots," he said.

In 2014, China bought over 57,000 industrial robots, but less than 30 percent of them are from domestic suppliers, data from the China Robot Industry Alliance shows.

Foreign heavyweights including ABB Ltd, KUKA Robotics Corp and FANUC Corp are sharing the rest 70 percent of the market.

"China's robot industry is like a toddler. But it is growing in the world's largest robot market where many competitive foreign enterprises are scrambling for a pie. Opportunities abound, so do challenges. A simple mistake is likely to nip the industry in the bud," Qu of Siasun said.

China now has few enterprises that can provide mass produced and reliable industrial robot components such as speed reducers, drive and control devices, as well as servomotors.

"Most of these components are still imported from foreign countries, whose steep tariffs increase the cost of robots," Hao of the China Robot Industry Alliance said.

For instance, speed reducers could account for about 30 percent of domestic robots' cost, compared with only 12 percent for similar Japanese robots, an industry resource said.

But local enterprises are already accelerating steps to boost their capability in research and development as well as small-scale production of key robot components. Shaanxi Qinchuan Machinery Development Co Ltd, for instance, has poured 194 million yuan in 2013 into a robot speed reducer project, which can now produce 500 to 700 units per month.

"We are working on a mass production assembly line project. When completed, it will boost monthly production capacity to 5,000 units by the end of 2016," the company said in a press release in November.

Siasun also expanded its presence in the niche by setting up a unit in May 2015.

It is planning to acquire competitive domestic and international component manufacturers after the Shenzhen-listed company raised 2.96 billion yuan from five institutional investors in November.

"We have been in negotiations with potential companies for over a year and we hope to complete the acquisition by June," Qu, president of Siasun said, declining to offer more details.

"Our goal is not to catch up but to take the lead by innovating on the basis of state-of-the-art technologies," he said.