China shows off its buying power 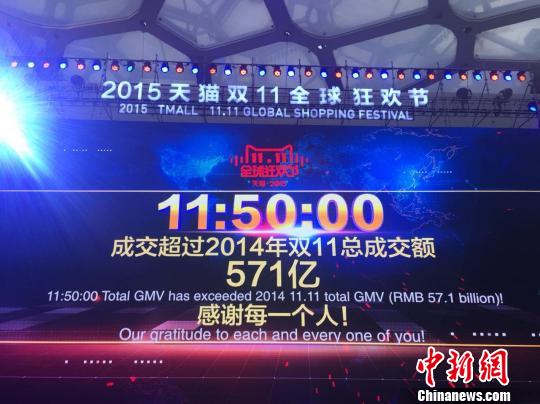 Picture captures the moment when sales of Alibaba's Tmall surpasses that of last year's Singles Day shopping festival on November 11, 2015. The real-time data was broadcast on live at a hours-long televised gala held by Alibaba at the eve of this year's Singles Day sales. (Photo: Chinanews.com/Zhang Wei)

Singles Day is not a traditional festival, but e-commerce giant Alibaba has been pushing November 11 ― a date heavy on ones ― since 2009 as it looks to tap the country's huge, and expanding, army of Internet shoppers.

At first it was marketed as an "anti-Valentine's Day," featuring hefty discounts to lure singletons and price-sensitive buyers. But with sales hitting new highs year after year, it has become a highly lucrative business opportunity embraced by digital retailers.

Competition for a slice of China's online population of more than 668 million is turning increasingly fierce.

James Bond actor Daniel Craig, and Hollywood star Kevin Spacey ― in his role as President Frank Underwood from the Netflix series "House of Cards" ― were just two of the galaxy of foreign and domestic stars involved.

The company's efforts paid off in spades, with shoppers splashing out 91.2 billion yuan over the course of the sale.

Last year's total of $9.3 billion was matched a little more than 12 hours after the promotion's midnight start.

In comparison, desktop sales for the five days from Thanksgiving through Cyber Monday in the United States last year stood at $6.6 billion, according to Internet analytics firm comScore.

"The 2015 sale eclipsed last year's final results in a little over half the time," the company said.

In an earlier release, Alibaba's chief executive Daniel Zhang said: "The world will witness the power of Chinese consumption on November 11."