When Rehangul Yimir came to Beijing to attend her first National People's Congress (NPC) session in 2013, the nervous lady was the youngest deputy from the Xinjiang Uyghur autonomous region. [Special coverage]

She was so afraid of being late to her meetings that she dared not sleep at night.

After five years, now the more experienced Rehangul said "coming to Beijing for the two sessions is like going to my parents' home". With more confidence and determination, she proposed bigger suggestions to further develop her hometown.

From a migrant worker to an NPC deputy 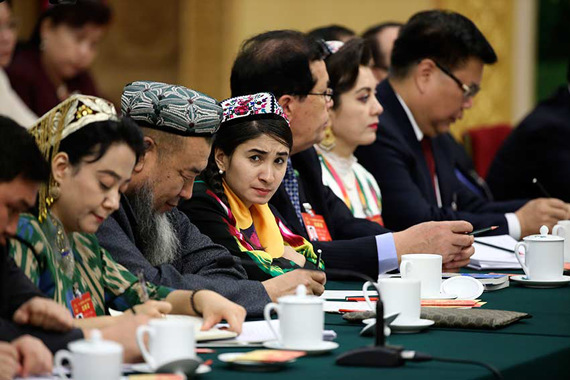 Rehangul Yimir at a panel discussion in Beijing on March 12, 2017 during the National People's Congress. (Photo/Asianewsphoto)

Born in a family with six other siblings in a small county in Xinjiang in September 1989, Rehangul dropped out of middle school as her parents could not afford the tuition fee.

Her parents then started looking for a potential husband with a stable income, but Rehangul refused and went to East China's coastal Zhejiang province to find a job.

Due to language barriers, she found it nearly impossible to communicate when she first began working at a textile factory in 2007.

But she didn't give up and worked hard to learn Mandarin and hone her skills. Within a short time she impressed the company so much with her diligence that she was named the workshop manager.

In the years that followed, she brought over 1,000 workers from Xinjiang to Zhejiang, who in turn contributed more than 10 million yuan to their hometown, as well as creating a team that became known for its "assiduousness, wisdom, honesty and integrity" in China's eastern areas.

The year 2012 was the most fruitful period for Rehangul. She was accepted in Xinjiang Vocational University with Chinese translation as her major, and elected as a delegate to the 12th National People's Congress.

Record during the two sessions

In 2013, China Daily video journalist Cao read about Rehangul's story in a Chinese outlet and contacted Rehangul to see whether she could interview and record her during the two sessions.

Rehangul gladly agreed so Cao was able to follow her from early morning to group discussion of NPC delegates to Rehangul writing her speech in her hotel room in the evening.

"She was nervous, flustered and young. She wrote a speech for panel discussions and practiced dozens of times in her room as she wasn't a fluent Mandarin speaker," Cao vividly recalled.

As the interview went well, Rehangul and Cao agreed to meet up again the next year.

Since then, Rehangul has brought news and surprises to the two sessions every year. And the filming continues.

In 2015, Rehangul featured in CCTV's Spring Festival Gala as a national model worker.

Now she is a deputy head of a township in Kashi, Xinjiang Uygur autonomous region.

Rehangul revealed that she is expecting a baby this year. "It has been three months and one day," the mother-to-be's face lightened up when she shared this news with China Daily.

This year, her suggestion is to accelerate the construction of the China-Pakistan railway and build more training bases in Xinjiang.

Kashi, a central area in southern part of Xinjiang, borders Pakistan and other Central Asian countries. "A number of the neighboring countries surely want to know more about our culture and development," she said.

Rehangul said the problem is that companies need skilled workers but there are not proper avenues to train the local population.

"For example, Kashi has a textile factory, so a training course in textiles should be established," she suggested.

Rehangul said that though there have been changes and growth in her in the past five years, one thing that would not change is her determination to contribute to the development of Xinjiang.