Pyramid schemes first appeared when Western direct selling companies started operating in China in the 1980s. Direct selling is the marketing and selling of products directly to consumers; it reduces prices of products by cutting the costs of transportation and retailing. Since Chinese people have tight family bonds, the target customers of direct selling in the initial stages were members of the sellers' families. Many people succeeded in convincing some of their family members to become "direct sellers" or "lower-level distributors" of products to earn some money. Gradually, however, some direct selling projects transformed into pyramid schemes, with "investments" replacing the products.

The Chinese government banned all direct selling companies in 1998, although foreign companies such as Amway and Sunrider had obtained licenses to sell their products from retail stores before the ban was imposed. The ban continued until the State Council, China's Cabinet, introduced the Regulation on Direct Selling Administration and Prohibition of Pyramid Schemes Ordinance in 2005 as part of its commitment to the World Trade Organization. Distinguishing direct selling from pyramid schemes, the regulation strictly prohibits such schemes. And the Criminal Law states that pyramid scheme sellers face imprisonment and heavy fines in accordance with the severity of their crimes.

Pyramid schemes, however, have survived. One reason for that is, the operators and "foot soldiers" of pyramid schemes are closely knit because of family relations and/or friendship, and hence difficult to identify. It is also very difficult to trace the money the fraudsters have collected, let alone recover it. And since the fraudsters manage to "hide" money, even after being imprisoned for their crimes, they tend to use the "hidden" money to start another scheme again after they are released.

Many continue defrauding others by selling such schemes from different locations to avoid arrest. Others continue to do so under duress. Pyramid schemes seem to be running in many parts of China, with their promoters exploiting the internet and using fake investment programs to attract new "investors" or recruits.

To combat pyramid schemes, the authorities have to strengthen cross-regional enforcement, and treat pyramid scheme fraud as a property crime so that those fraudsters get severer punishment. Given that the boundary between direct selling and pyramid schemes has blurred, the government should tighten regulations on direct selling to prevent it from being distorted into a scheme to defraud unsuspecting people.

Moreover, since those running pyramid schemes usually gather in the name of family get-togethers or company training projects to keep collecting money, law enforcement agencies and community organizations should make the best of the "grid management system"－a digital administrative mechanism to supervise and track suspicious movements of people and money－to nab them. In fact, strict supervision of money flow can be used to nip pyramid schemes in the bud.

The judiciary, on its part, can ask law enforcement officers to intensify the search for missing people in order to track pyramid scheme sellers and increase the sentences of those arrested for restricting people's personal freedom and forcing the victims to join them in their criminal schemes.

Only through the joint efforts of the law enforcement officers, the judiciary and the public can pyramid schemes be rooted out of society.

The author Qiao Xinsheng is a professor of law at Zhongnan University of Economics and Law in Wuhan. 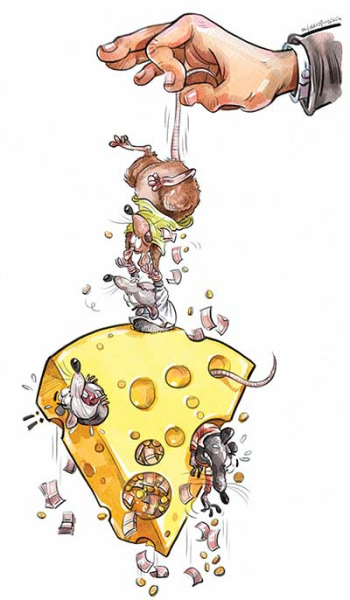