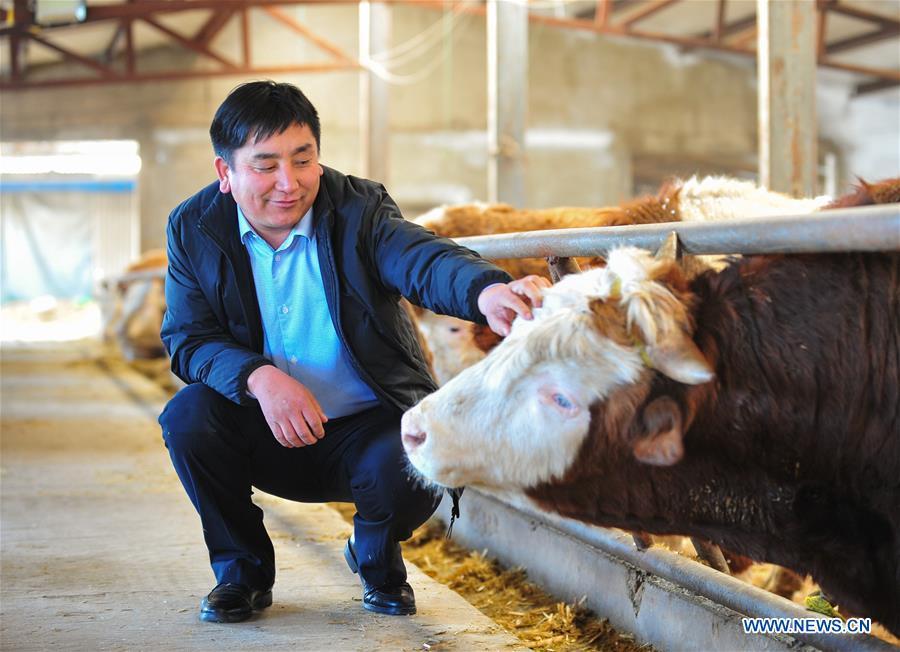 Wu Yunbo checks on cattle at his cooperative of Dongsala Village in Jarud Qi (County), north China's Inner Mongolia Autonomous Region, Feb. 25, 2018. Wu Yunbo of Mongolia ethnic group comes from Dongsala Village of Jarud Qi (County) of north China's Inner Mongolia Autonomous Region. As a secretary of the Communist Party of China local branch in the Dongsala Village, he initiated a cooperative in 2013 and explored a way to get people out of poverty. Farmers and herdsmen were encouraged to join the cooperative by investments in the form of cash, croplands or cattle. The total assets of the cooperative have been valued at 34 million yuan (5.4 million U.S. dollars) so far. Its net profit in 2017 reached 3.6 million yuan (568,720 U.S. dollars). The cooperative, which is growing steadily, has helped 37 households shake off poverty. As a deputy to the 13th National People's Congress, Wu is considering to lead all villagers and herdsmen of the village to get rich by further expanding the cooperative and scaling up cattle breeding business. (Xinhua/Peng Yuan)