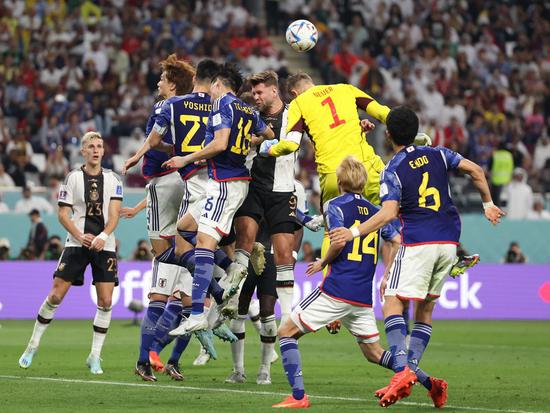 Manuel Neuer (top, 1st R), goalkeeper of Germany, vies for a header during their Group E match against Japan at the 2022 FIFA World Cup at Khalifa International Stadium in Doha, Qatar, Nov. 23, 2022. (Xinhua/Cao Can)

Japan scored twice in a space of eight minutes to shock four-time champion Germany 2-1 in a World Cup Group E game on Wednesday.

It was the second stunner in Doha since Saudi Arabia came from one goal down to upset Argentina 2-1 in a similar drama on Tuesday.

Like Argentina's loss to the western Asian team, Germany led from a first-half penalty by Ilkay Gundogan, who went to the spot after Shuichi Gonda brought down David Raum in the box.

A mostly uninspired Japanese team woke up after Gonda made four brilliant saves in quick succession around the 70th minute, leveling the score through Ritsu Doan in the 75th minute and snatching the winner through Takuma Asano in the 83rd minute for its biggest World Cup victory to date.