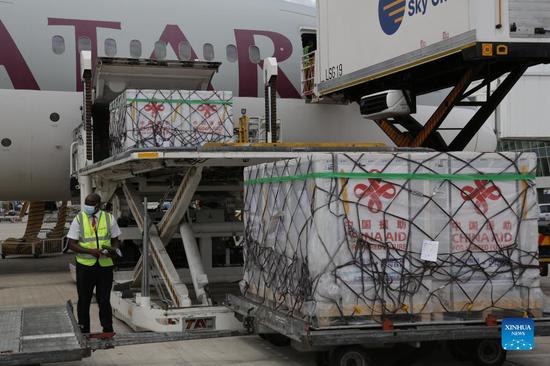 Tanzania on Monday received the second batch of 500,000 Sinopharm vaccine doses from China, boosting the east African nation's drive to vaccinate its people against the COVID-19 pandemic.

In early October, Tanzania received 1,065,600 doses of Sinopharm vaccines donated by the Chinese government via the COVAX facility.

"The second consignment of the vaccines donated by the Chinese government will go a long way in helping Tanzania to fight the virus pandemic," said Gwajima.

The minister appealed to her fellow country men and women to get the Sinopharm vaccines, saying they are safe and they have been approved by the World Health Organization.

Chen Mingjian, the Chinese Ambassador to Tanzania, said the Chinese donated vaccines will play an effective role in helping the Tanzanian government to control the spread of the virus and protect the life and health of Tanzanians.

"We have developed safe and reliable vaccines that meet scientific standards and have gradually realized the recovery of social and economic development," she said.