India-related variant can "spread like wildfire" among people not vaccinated: British health secretary 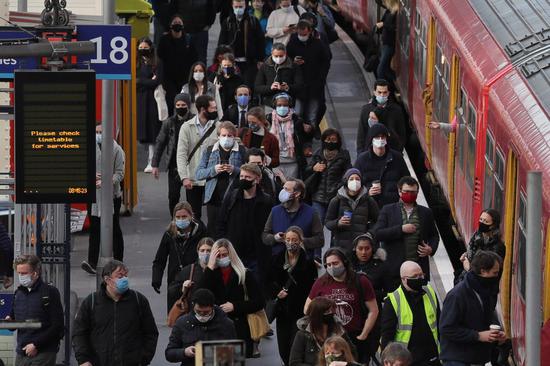 The India-related variant is becoming the dominant strain in some parts of Britain, said Health Secretary Matt Hancock.

British Health Secretary Matt Hancock warned Sunday that the coronavirus variant first detected in India can "spread like wildfire" among those who haven't had a jab.

The variant is "becoming the dominant strain in some parts of the country" such as Bolton and Blackburn, he told Sky News.

On a more positive note, he said there is a "high degree of confidence" that the current vaccines are effective against the variant.

Hancock urged those who are eligible for vaccination but have not yet booked an appointment to come forward to get their vaccine.

The health secretary described the current situation as "a race between the vaccination program and the virus", with the new variant having "given the virus some extra legs in that race".

Public Health England (PHE) said cases of the variant known as B1617.2 in Britain have more than doubled to 1,313, up from 520 cases recorded by PHE last week.

However, Hancock said Monday's planned easing of lockdown would still go ahead.

A decision would be announced on June 14 as to whether the country would proceed to the final stage on June 21, when all legal limits on social contact are expected to be removed, according to Hancock.

From Monday, pubs, bars and restaurants in England will be permitted to open indoors, while indoor entertainment will also resume, including cinemas, museums and children's play areas.

Meanwhile, all remaining accommodation including hotels, hostels and B&Bs can reopen from Monday, according to Johnson.

British experts warned that the next stage of lockdown easing should be approached "with utmost caution".

"It is a real worry that when further measures lift on May 17, the majority of younger people, who are often highly socially mobile and could therefore be most at risk of a more infectious strain, are not yet vaccinated," he told the BBC.

According to the latest official figures, more than 36.3 million people in Britain have been given the first jab of the coronavirus vaccine.

To bring life back to normal, countries such as Britain, China, Russia, the United States as well as the European Union have been racing against time to roll out coronavirus vaccines.