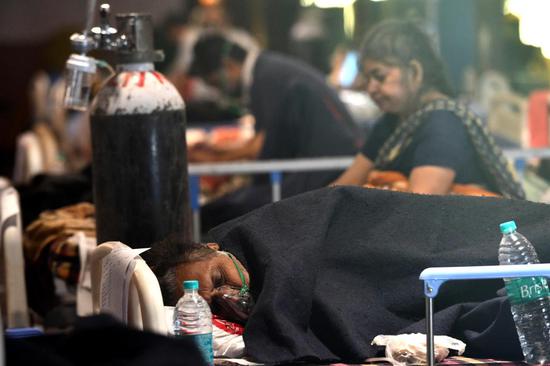 India has been facing a deteriorating COVID-19 situation, as the World Health Organization (WHO) said on Wednesday that India alone accounted for 38 percent of global case growth last week.

The country also reported a 93 percent week-on-week increase in the number of coronavirus-related deaths in the seven-day period that ended on April 25.

On Thursday, India reported the largest daily increase of 379,275 new cases since the outbreak of the pandemic, and the country has been reporting more than 300,000 new COVID-19 cases each day over the past week.

The ongoing wave of infections in the country could peak in mid-May, according to projections presented at a meeting between Indian Prime Minister Narendra Modi and officials from the worst affected states.

Daily cases in India are projected to reach 500,000 and could subside between June and July, Indian media reported.

The surge in India is understood to be fueled by a new COVID-19 variant dubbed the "double mutant" and scientifically identified as the B.1.617 variant. It was "detected at increasing prevalence" among the new cases in the country, according to the WHO.

The B.1.617 variant is believed to contain mutations from two separate virus variants. The WHO said that B.1.617 "has a higher growth rate than other circulating variants in India, suggesting potential increased transmissibility."

The variant has been detected in nearly 20 countries and regions around the world. Some countries amid fears of the "double mutant" have imposed restrictions on flights from India.

On Monday, WHO chief Tedros Adhanom Ghebreyesus said the situation in India is "beyond heartbreaking," and his organization is sending extra staff and supplies there to help overcome the pandemic.

The WHO and the UN Children's Fund are procuring equipment and supplies, including 7,000 oxygen concentrators and 500 nasal devices for oxygen supply, as well as oxygen-generating plants, COVID-19 testing machines, and personal protective kits, the spokesperson said.

The WHO is also helping set up mobile hospital units and providing supplies for laboratories. Some 2,600 WHO field officers have been immediately deployed to support health authorities.

"China has expressed readiness early on to provide necessary support and assistance to India, and is coordinating Chinese enterprises to positively respond to India's demand for anti-epidemic supplies such as oxygen concentrators," Wang Wenbin, spokesperson for the Chinese Foreign Ministry, told a regular press conference on Tuesday.

"We are willing to continue to carry out anti-epidemic cooperation with India in various ways in its fight against the epidemic. We are convinced that India will get through the difficulties and come out the other side," he said.

On Wednesday, Ireland sent an emergency donation of 700 oxygen concentrators to India, according to a government statement.

Transport arrangements are being made for a further donation of more life-saving equipment including at least one oxygen generator and 365 ventilators, said the statement posted on the Irish government's website.