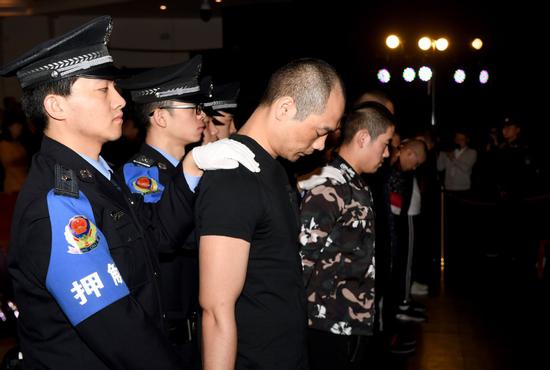 Three-year campaign has achieved good results, with work to continue

A three-year campaign against organized and gang-related crimes has achieved good results, and advanced efforts will be made to fight such crimes regularly, Guo Shengkun, a member of the Political Bureau of the Communist Party of China Central Committee, said on Monday.

He said the campaign has achieved its goals by fundamentally containing organized crimes and boosting people's sense of happiness and security.

From 2018 to 2020, a total of 3,644 mafia-style organizations and 11,675 other criminal gangs were busted around the country. More than 242,000 suspects, including 5,768 fugitives, involved in such crimes were arrested. The commission said 43,144 suspects involved in gang crimes also turned themselves in.

A nationwide survey conducted by the National Bureau of Statistics showed that in the second half of last year 98.4 percent of people said they felt secure, and 95.7 percent of respondents were "satisfied" or "relatively satisfied" with the effectiveness of the campaign.

President Xi Jinping, who is also general secretary of the CPC Central Committee, gave important instructions on the campaign on many occasions after it was launched.

In 2019, Xi addressed provincial-and ministerial-level officials and asked them to keep a close eye on major cases and networks and the financial foundations and "protective umbrellas "of criminal gangs, and work harder to fight and prevent both the symptoms and root causes of organized crimes.

During the CPC Central Conference on Work of Overall Law-based Governance in November, Xi called for a continued crackdown on violations of social order and making the fight against organized crimes and their protective umbrellas a normal practice.

Amid the campaign, discipline inspection and supervision authorities nationwide filed cases against 115,913 officials for corruption and sheltering criminal gangs, and imposed punishments on 80,649 people and transferred another 10,342 people to judicial organs, the commission said.

Guo said the campaign was not a one-off effort, and urged judicial authorities to be well-prepared for a long-term fight against organized crimes, adding that the fight would be a normal practice.

A mechanism for preventing and rectifying problems at the source should be established and improved to remove the soil that bred such illegal activities, he said.

He urged enhanced rectification in 10 key industries and sectors including finance and transport, focusing on solving the problems of absent social governance and weak industry regulation, and improving the mechanism for regular contact among the departments of discipline inspection and supervision, political and legal authorities and industry regulators, to cover all aspects where crimes may emerge.

In addition, Guo said, a prediction and early warning mechanism for organized crimes should be established that will enable regulators to conduct in-depth research on emerging crimes based on big data and cloud computing to promptly resolve such problems.

Efforts should also be made to establish an intelligent and open reward mechanism for reporting organized crimes, smooth the reporting channels, normalize the operation of the national anti-organized crime platform and expand its functions, Guo said.

Regular inspections will be carried out, and the central government will launch an inspection every four years. Governments at other levels should also launch inspections to ensure all levels are inspected on a regular basis, Guo said.

Guo urged improvements to the evaluation mechanism to encourage areas, departments and individuals to make outstanding achievements in fighting organized crime, and criticize governments and departments that don't treat the work seriously.