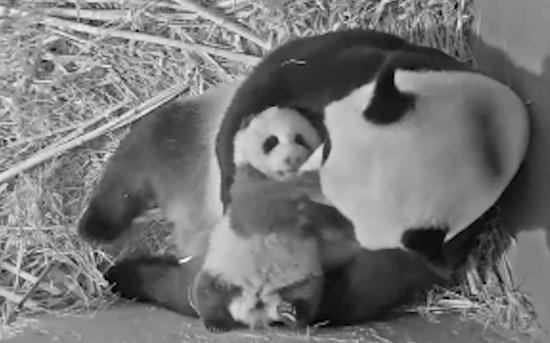 An image grabbed from a video provided by the Ouwehands Zoo shows giant panda cub Fan Xing and its mother Wu Wen at Ouwehands Zoo in Rhenen, the Netherlands, in July, 2020. (Xinhua)

A panda cub of almost six months old born in Ouwehands Zoo in the Netherlands is male, the zoo in the central Dutch city of Rhenen revealed on Wednesday.

This panda cub was born on May 1, 2020 and was named Fan Xing. "Recently, we were able to separate mother Wu Wen and Fan Xing for a brief moment, to allow a health check to take place," Ouwehands Zoo noted in a statement. "During this health check, we are also able to discern the gender."

Since his birth, Fan Xing has stayed in a maternity den with his mother. His development and growth were only followed by the animal keepers through camera footage. According to the zoo, it won't be long until visitors of Ouwehands Zoo can see the cub, probably halfway through November.

Fan Xing belongs to China, just like his parents. The giant panda is an endangered species that is only found in the wild in China. An international breeding program was established to protect this species and the pandas in Ouwehands Zoo are part of this program.

According to the arrangement with China, Fan Xing can stay in the Netherlands for four years. After that, he will go to China to continue to contribute to the breeding program.