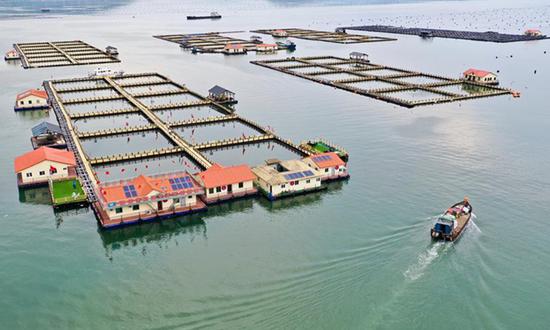 Aerial photo taken on July 15, 2020 shows a mariculture zone in Ningde City, southeast China's Fujian Province. Ningde City has developed a whole industrial chain of large yellow croaker including breeding, processing and marketing. In 2019, the output of large yellow croakers in the city reached about 164,000 tons, accounting for more than 80 percent of the national output and creating output value of over ten billion yuan (1.43 billion U.S dollars). Photo:Xinhua

Ambassadors to China from some 30 countries on Tuesday paid a visit to Ningde, an East China city known for its pioneering efforts in poverty alleviation, and the local practices not only received praise from the envoys, but inspired many to say they will pursue innovative poverty reduction in their own countries.

China's has lifted more than 75 million out of poverty over the past 40 years, accounting for 80 percent of the world's total over the same time period, which is fully evident  to the envoys visiting a small village Chixi in Ningde, East China's Fujian Province. The tour was co-organized by the International Department of the Central Committee of the Communist Party of China and the CPC Fujian Provincial Committee.

During their tour, many ambassadors said that although the situation in their countries was different, the story of Chixi and Ningde inspired them in different ways, and they  would use their experience to improve livelihoods of their people at home.

Chixi, a mountainous village that is home to  the "She" ethnic group, received nationwide attention when its situation was exposed in newspapers in 1984. Donation of seeds and livestock came, but that didn't change the situation as the village was cut off from outside.

By 1995, a road was built and residents were relocated to a central village. Transportation and connections to outside world made a tea industry and eco-tourism possible. Per capita income increased from just 160 yuan ($24) per year to more than 20,000 yuan.

The ambassadors spent two hours on a high-speed train and a bus to reach the village from provincial capital Fuzhou. Tanzania's ambassador said the village was so clean and modern that it looks like a town.

The ambassador said he was impressed by how the people and the village chief were actively engaged in the cause. The chief "knew everything, every number of his village."

"In Fiji, we have the fertile land, we have the sea, but it is the people...," Ambassador Manasa Tagicakibau told the Global Times, saying it is crucial to mobilize the public who are the subject of poverty eradication.

Close relations between local officials and people spurred what many observers call the miracle of poverty eradication in China. There are 3 million officials of the Communist Party of China stationed in villages nationwide carrying out this work. Specialists in science and technology are dispatched to poverty-stricken areas to help locals develop suitable economic models. Big data can monitor the situation of difficult households on the edge, making sure they will not return to poverty when something unexpected happen.

Chixi is just one of the stories about a once impoverished village shrugging off poverty by developing a unique path via decades of efforts.

Tagicakibau noted that election politics in Fiji sometimes jeopardizes the efficiency and stability of policies as many measures lack follow-up and implementation. Sometimes proposals were not carried out after people get elected, he said.

Another lesson many ambassadors mentioned was that measures have to suit local conditions as no model can be directly copied to other countries.

Ningde's development is based on the situation in the city, and Gabon should develop in its own way, making use of the water, forest and mineral resources, Ambassador Baudelaire Ndong Ella told the Global Times.

Ambassador of Bahamas Sterling Quant said that poverty alleviation is at two levels, top-down government support and bottom-up commitment. The government can provide some subsidies and the people need training. "The two must match to make all the measures really work," he said.

After visiting a battery manufacturer in Ningde whose customers include BMW and Toyota, Quant said such a project requiring many resources and having large market may not be what Bahamas will do, but the poverty eradication strategy itself is very useful.

China will eliminate absolute poverty in 2020, 10 years ahead of the deadline set by UN's 2030 Agenda for Sustainable Development and its 17 Sustainable Development Goals (SDG). The story of Ningde and Fujian is not only a reference to other countries, but also very inspiring for developing countries to figure out a suitable way to tackle their poverty, the ambassadors said.