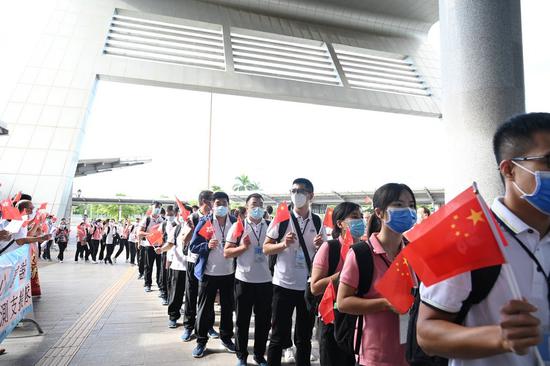 With 1.78 million specimens tested and 32 new patients identified, mainland medical experts, who worked in relays to carry out round-the-clock COVID-19 testing over the past two weeks, have accomplished their mission in Hong Kong.

The rapid community spread of coronavirus was finally contained as no local infection was reported on Tuesday, the first time since early July.

"Hong Kong people will be able to gradually return to their normal lives," Chief Executive of the Hong Kong Special Administrative Region (HKSAR) Carrie Lam said. "Students can return to schools starting next week and business activities can gradually resume."

Mainland support teams came to Hong Kong successively from the beginning of August to assist the HKSAR government with its 14-day Universal Community Testing Program (UCTP) which ended on Monday.

The coming of altogether more than 570 mainland testing professionals from Guangdong, Guangxi and Fujian, some of whom used to fight COVID-19 in Wuhan and overseas, greatly improved Hong Kong testing capacity. The "Fire Eye Laboratory," responsible for testing the specimens of the UCTP, can cope with as many as 500,000 nucleic acid tests a day if using mixed-together methods.

"Without the strong support of the central government, including temporary air-inflated laboratories and support teams for nucleic acid testing, Hong Kong would not be in a position to implement the UCTP," Patrick Nip, secretary for the civil service of the HKSAR government, said.

The result of the mass testing program is satisfactory.

The program not only helped find asymptomatic virus carriers and broke transmission chains but will facilitate the analysis of Hong Kong's epidemic situation and be conducive to anti-epidemic work in the next step, Secretary for Food and Health of the HKSAR government Sophia Chan said.

During the 14-day testing, members of the support teams raced against time to push forward with the virus testing work.

As they worked long hours every day, diapers became a necessity. "To save time, we try not to go to the toilet," Xiao Fangzhen, a member of the support teams, said and explained that wearing diapers allowed them to work in the laboratory for 12 hours non-stop.

Due to the long shifts, many team members suffered sharp pains in their arms and shoulders, frequently had leg cramps at night, and even could not straighten their fingers. "Our Guangdong team alone has used up more than 500 pain relievers," Yu Dewen, head of the Guangdong team, said.

"They knew the task in Hong Kong would be very hard but they still came here without hesitation," Pang Jun, head of the Guangxi team, said. "A team member postponed the wedding and some members gave up significant professional exams."

With their mission completed, the mainland support teams left Hong Kong on Wednesday.

Qiu Hong, deputy head of the Liaison Office of the Central People's Government in the HKSAR, has said that the central government and the mainland are the strongest backing of Hong Kong.

Since the epidemic outbreak, the central government has provided enormous support for Hong Kong's anti-COVID-19 effort.

Apart from assistance in the mass testing program, the central government is also helping Hong Kong build a two-storied temporary hospital with more than 800 beds and add another 1,000 beds in the community treatment facility at the AsiaWorld-Expo.