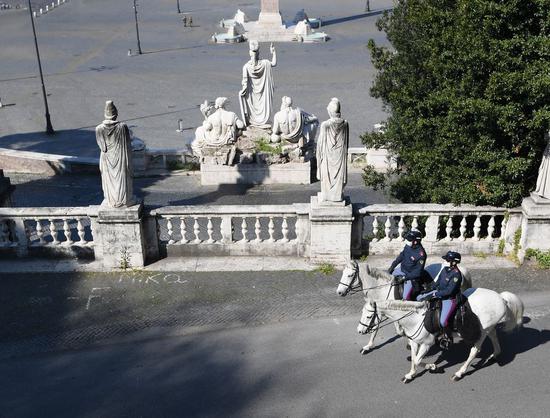 The following are the latest developments of the COVID-19 pandemic in European countries.

ROME -- The COVID-19 has claimed another 602 lives in locked-down Italy over the past 24 hours, bringing the total number of infections, fatalities and recoveries to 162,488 since the pandemic began here in late February, the country's Civil Protection Department said Tuesday.

Also on Tuesday, the country took its first tentative steps towards reopening its economy five weeks after the first national lockdown entered into force. 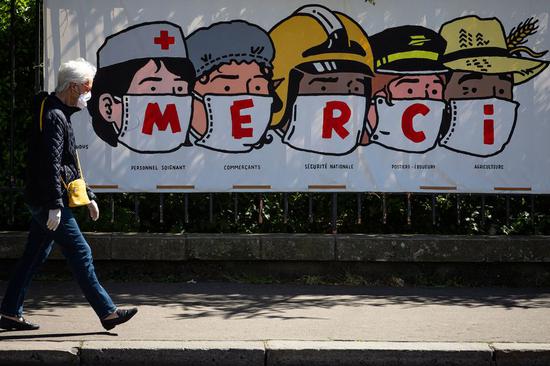 A resident walks past a poster thanking people in various professions during the epidemic in Paris, France, on April 14, 2020. (Photo by Aurelien Morissard/Xinhua)

PARIS -- A total of 15,729 patients have succumbed to the COVID-19, including 10,129 died in hospitals and 5,600 in nursing homes, French General Director for Health Jerome Salomon said on Tuesday.

The death toll increased by 762 on a daily basis, more than the 574 reported on Monday. French hospitals registered a single-day loss of 541 coronavirus patients, Salomon said at a daily conference on the epidemic.

Meanwhile, another 5,497 positive cases for COVID-19 were reported, bringing the total of confirmed cases to 103,573 by Tuesday. That includes 32,292 patients who have received treatment in hospitals, up by 179 on daily basis. 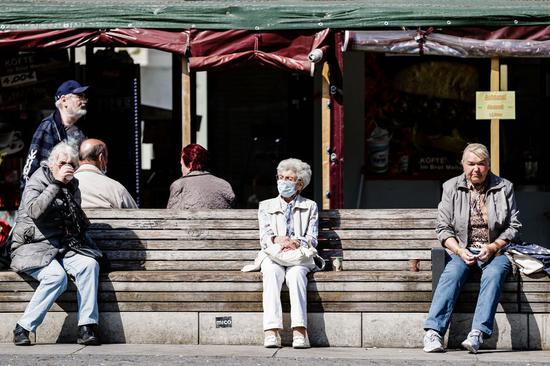 People rest on a bench with social distancing in Berlin, capital of Germany, April 11, 2020. (Photo by Binh Truong/Xinhua)

BERLIN -- The daily number of new coronavirus infections continued its downward trend in Germany on Tuesday. During the past 24 hours, the registered increase was 2,082 to a total of 125,098, the Robert Koch Institute (RKI) announced.

More than half of infected people in Germany (68,200) have already recovered from COVID-19, according to the RKI. The number of deaths from the new coronavirus in Germany increased by 170 to 2,969 on Tuesday.

The numbers in Germany "show some positive trends," said RKI President Lothar Wieler. "It is nice to see that our efforts are paying off." 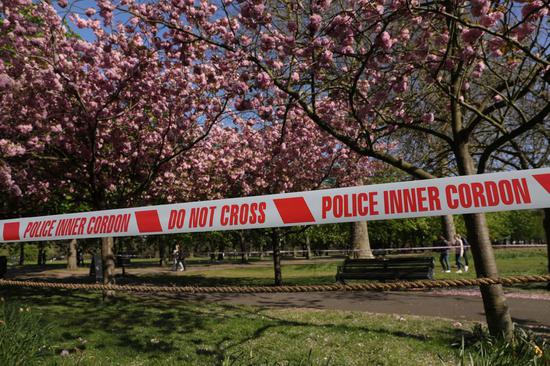 An area is taped off to prevent people getting into the blossoms in Greenwich Park in London, Britain, on April 13, 2020. (Photo by Tim Ireland/Xinhua)

LONDON -- The death toll of those hospitalized in Britain who tested positive for the novel coronavirus reached 12,107 as of Monday afternoon, a daily increase of 778, the Department of Health and Social Care said Tuesday.

"These are tough times and there will be more to come," said Chancellor of the Exchequer Rishi Sunak during Tuesday's Downing Street daily press briefing, adding that the latest death figures are a "powerful reminder" of the need for people to stick to social distancing rules. 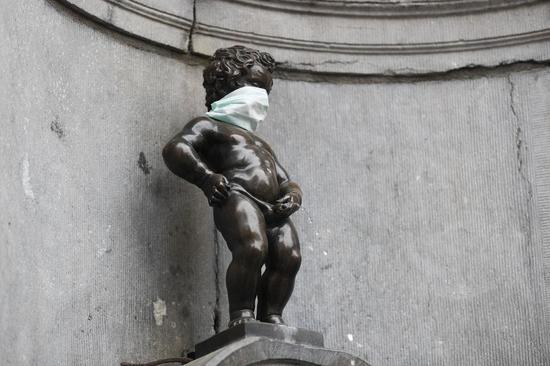 BRUSSELS -- Since the start of the COVID-19 pandemic, Belgium has recorded 4,157 deaths as of Tuesday, according to fresh figures from Belgian health authorities.

A total of 262 deaths have been reported and confirmed in the last 24 hours, the public health institute Sciensano said.

The decrease in the number of patients hospitalized in the last few days continues. In the last 24 hours, Belgium has recorded 242 new hospitalizations, while 161 cured people have left the hospital. 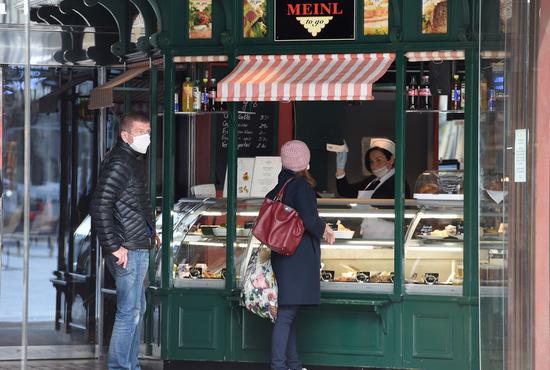 Customers visit a reopened snack bar at Graben street in Vienna, Austria on April 14, 2020. Some shops and businesses in Austria began to reopen from Tuesday. (Xinhua/Guo Chen)

VIENNA -- Small shops and hardware stores in Austria re-opened on Tuesday as the first step towards a "new normal" amid the COVID-19 pandemic, according to Chancellor Sebastian Kurz.

As of Tuesday morning, shops of up to 400 square meters and hardware stores in the Alpine country have re-opened under strict precautionary measures such as mask-wearing and social distancing.

"We are on track," Kurz announced to the media on Tuesday morning. "The numbers of new infections and of hospitalisations are going in the right direction." 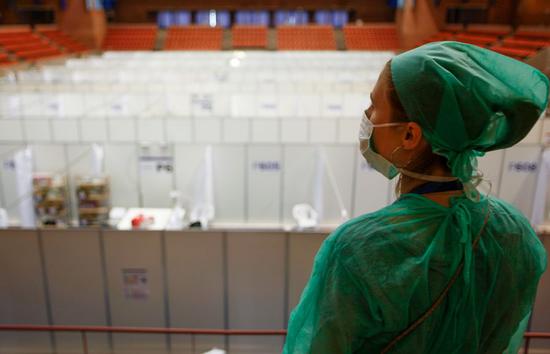 A medical worker observes installation of beds for COVID-19 patients at a sports hall in Barcelona, Spain, April 13, 2020. (Vall d'Hebron Hospital/Handout via Xinhua)

MADRID -- Spain is handing out 10 million free masks from Monday to Thursday this week, to commuters going back to work after a two-week lockdown that forced all non-essential workers to stay home to combat the spread of COVID-19, the Ministry for Territorial Administration said on Tuesday.

Face masks are being handed out to commuters at train and metro stations as well as at bus terminals across Spain. Residents can pick up masks at 1,300 distribution points throughout Spain.

The distribution is a collaborative effort between communities, town halls, civil protection services and local and regional police, with the participation of 350,000 members of the State Security Forces.