China’s young designers get ready for the big time 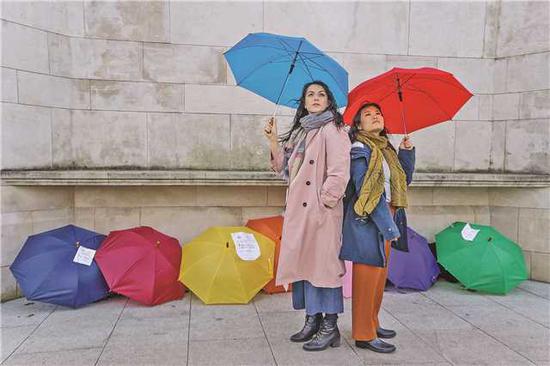 Laura Tipper (left) as Lucy and Mei Mac as Wei in Under the Umbrella. （Photo provided to China Daily）

London Fashion Week 2019 may be history now but one of its enduring images, perhaps more than in any previous year, is the increasingly high profile of Chinese designers showcasing their work.

This should come as no surprise. The emergence of an increasingly large pool of talented Chinese fashion designers, often Western-educated, has been developing for several years.

China’s increasing integration with the global economy is often cited as one of the key enabling factors but my research strongly suggests that younger Chinese designers now have a far more determined, confident and innovative mindset.

But, perhaps paradoxically, these younger designers are turning to their national heritage for inspiration, incorporating a subtle fusion of Chinese elements with a modern look in their designs.

This could not be exemplified better than by London-based luxury fashion brand designer Xu Zhi, whose work combines Chinese heritage with Western influences.

Zhang Huishan, another rising Chinese designer who also starred at London Fashion Week, also draws inspiration from China’s past and blends this beautifully with Western trends.

Zhang also typifies these younger generations of designers by publicly espousing pride in their Chinese heritage and taking great satisfaction from showcasing it globally.

This is a massive boost for the continuing transition of the Chinese economy from low cost, often associated with low quality, manufacturing to high end, high quality, premium brands.

It is their national identity and Chinese-influenced high-quality brands that most motivate Zhang and his contemporaries.

Taking a contemporary approach to a traditional Chinese style can also be seen in the work of Chen Zen, who launched a knitwear label in 2017.

We should expect this trend to continue with increasing numbers of talented and determined Chinese fashion students graduating from many of the world’s top fashion schools – and expect China’s young designers to continue to find inspiration in the country’s long, rich, heritage, with an aesthetically appealing blend of the past and the present.

It is also highly likely that Chinese fashion designers will showcase an increasing variety of designs and styles, driven by an increasingly idiosyncratic identity.

Of course another major contributory factor behind the global rise of Chinese fashion designers is the growing and changing nature of the fashion eco-system based in Shanghai. Until recently foreign fashion brands dominated the city and other fashion hot spots across the Chinese mainland. But the pace with which younger Chinese fashion designers have progressed and achieved international prominence has resulted in a seismic shift towards a far greater appreciation of their fashion brands.

Beijing-born fashion designer Li Yang is another, whose work combines an eclectic mix of vibrant colors with dark, sharp tailoring.

But while this phenomenal rise and international spread of China’s young design talent is well worth celebrating, there are other pieces in the jigsaw that need to be put in place if Chinese fashion brands are to challenge the established household names from France and Italy.

Chinese designers desperately need support in all areas of an international brand building and brand management.

It is not just designers from China who possess an inner identity that places self-determination at its core; a similar phenomenon has occurred where younger fashion consumers are concerned. A herding mentality has now long gone, replaced by an increasingly idiosyncratic identity.

It is essential, therefore, that younger Chinese fashion designers follow marketing and branding principles very closely when attempting to build global fashion brands. Consumer research, market segmentation, brand positioning and strategic planning are all areas where they should look for support.

But they should not have to look far, given the increasing number of talented Chinese fashion marketing and branding university students, studying at an increasingly diverse range of international universities.

But most importantly the hunger and desire to build China’s first global fashion brand is such that this is surely only a matter of time.

The prominence of Chinese design and designers at London Fashion Week 2019 signifies unequivocally, as if further signals were needed, that Chinese fashion brands have arrived internationally, with their national heritage being their star attraction.

For China’s designers and their brands, the future could not look brighter. Expect fashion consumers worldwide to start to forget French and ignore Italian fashion brands in preference for Chinese heritage-infused fashion. Younger Chinese fashion designers: your time is now.