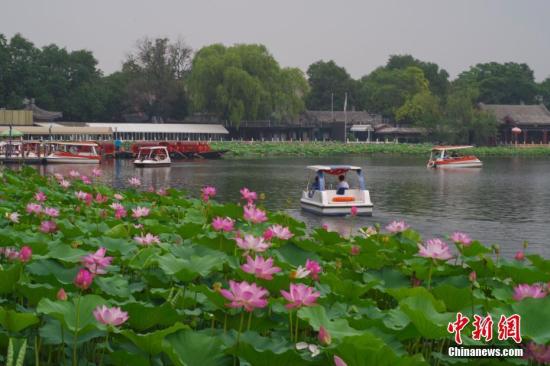 While generally lauding the plan, which is tailor-made for the capital based on its major air polluting sources, experts warned of the difficulties of achieving further air quality improvements in the city because of the change in major pollution contributors to more challenging types.

The capital plans to reduce the average concentration of PM 2.5 particulate matter, which poses health dangers, in its urban areas to 52 micrograms per cubic meter by 2020.

To achieve the goals, authorities plan to increase the amount of cargo moved by trains to 10 percent of the total from the current 2.9 percent, and to more than double the number of new energy vehicles to 400,000.

The capital also vows to enhance law enforcement against polluting diesel-powered trucks and to inspect at least 1.5 million of them every year.

Liu Ying, an expert at the Beijing Transport Institute, said road transportation currently accounts for more than 80 percent of the cargo in the capital, and the current proportion of cargo transported by train is similar to that in major cities around the world.

She said, however, that it's possible for the city to shift the transportation of some goods to rail, including new vehicles, construction material, steel and daily necessities.

"The shift from diesel-powered trucks to electric railways with almost zero release of pollutants will achieve remarkable results in reducing air pollutant discharges in the Beijing-Tianjin-Hebei region," she said.

Internal combustion engines contributed the largest amount－45 percent－of the locally generated PM2.5 in Beijing. Though diesel engines account for just 4 percent of the total engines in use, they contribute to 90 percent of air pollutants produced by engines, according to Shi Aijun, deputy head of Beijing Municipal Research Institute of Environmental Protection. The diesel engines are not all associated with vehicles, as other equipment may also use such engines.

Wang Shuxiao, professor of environmental studies at Tsinghua University, said the plan was drafted in accordance with the major air pollution contributors in the capital.

According to an analysis of pollution sources by Beijing Municipal Environmental Protection Bureau last year, kicked-up dust contributed 16 percent to PM2.5 density, second only to engines. The capital also plans to reduce kicked-up dust by more than 30 percent by the end of 2020 from that of 2017.

"It has become more and more difficult to further improve air quality in Beijing," Wang said.

The contribution of polluting sources that are relatively easy to control, including factories and coal burning, has decreased, while the contribution from lifestyle-related and mobile sources has increased, she said.