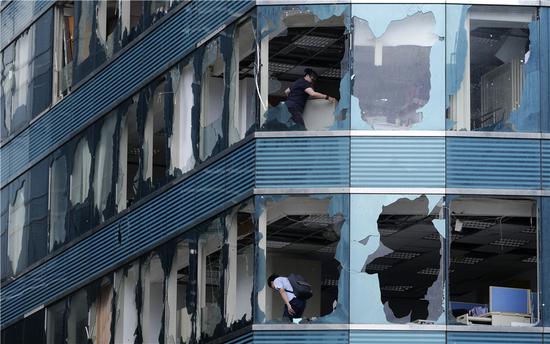 Life is returning to normal after super typhoon Mangkhut wreaked havoc in southern China, including Guangdong province and the Hong Kong and Macao special administrative regions, on Sunday.

After witnessing the typhoon's strength－including swaying high-rise buildings, flooded coastal hotels and broken windows－people are trying to cope with what's left in the wake of the storm, the most intense so far this year.

Many commuters in Hong Kong on Monday－the first day after Mangkhut struck and brought large-scale destruction－experienced suspended services and delays in buses, subways and taxis.

The storm knocked down 1,500 trees and blocked about 600 sections of road in the city, greatly impacting transportation. Secretary for Security of the Hong Kong SAR government John Lee Ka-chiu called the damage "serious and extensive".

Secretary for Food and Health of the Hong Kong government, Sophia Chan Siuchee, said 394 people were admitted to hospitals for emergency treatment during the typhoon. So far, 175 people remain hospitalized, two of them in critical condition.

By 3 pm on Monday, power was still out for about 13,500 customers of CLP Group, the electricity supplier said. The affected households, mostly in more remote areas in the northern New Territories, Yuen Long and Sai Kung districts, had been hard for repair workers to reach because of challenging road conditions.

In Guangdong, at least four people were killed when Mangkhut struck the province on Sunday and Monday, the Guangdong provincial Bureau of Civil Affairs said. Three of them were hit by falling trees in Guangzhou, while another one died when a house collapsed in Dongguan, about 60 kilometers from Guangzhou, on Sunday.

In Guangzhou, more than 7,030 trees had been uprooted by strong winds by 8 am on Monday, while many vehicles were reported to be damaged or destroyed by falling trees or branches.

Wang Qirong, a local driver, said some streets in the downtown area were flooded and he saw many tree branches and billboards blown down, damaging the vehicles parked along the roadside on Sunday.

Direct economic losses are still being calculated, according to the bureau.

Typhoon Mangkhut weakened to a tropical storm in the Guangxi Zhuang autonomous region by about 9 am on Monday. In Nanning, the regional capital, the city's international airport had canceled at least 73 flights as of 11 am on Monday.

Guangdong's Flood Control Drought Relief and Anti-Typhoon Headquarters urged in a statement on Monday that relevant departments and cities should not let down their guard against possible disasters while trying to restore production and rebuilding their homes.

"Flooding, landslides and other geological hazards that usually happen after typhoons might still threaten local people's lives and property, and relevant departments should continue to introduce effective and concrete measures to fight possible disasters," the statement said.

According to Wu Zhifang, chief forecaster at the Guangdong Meteorological Bureau, the Pearl River Delta region would continue to be hit by heavy rain in the coming one or two days before storms give way to autumn heat waves in the second half of the week.