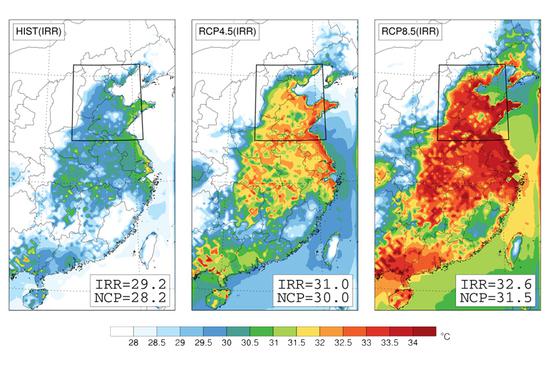 A new study reveals the North China Plain will face one of the worst consequences of climate change. (MIT Image)

The summer of extremes continues to scorch large areas of the world.

Rising temperatures recently forced Japan to declare a heatwave as a natural disaster and stirred farmers to protest in Europe.

And a recent report says China is likely to face one of the “most damaging heat effects” in decades to come.

It predicts repeated spells of extreme heat in the North China Plain (NCP), one of the world’s most densely-populated regions and known for a vast stretch of farmland that plays a similar role for the country as that of the Midwest in the U.S.

The highly-fertile farmland of the NCP is a crucial lifeline for feeding the whole country. “This spot is just going to be the hottest spot for deadly heatwaves in the future, especially under climate change,” Elfatih Eltahir, one of the researchers said.

The study, “North China Plain threatened by deadly heatwaves due to climate change and irrigation” published in the journal Nature, warns that it will be intolerable for farmers working in the field to adjust to high temperatures.

Researchers found intensive irrigation in the dry but fertile region increases the likelihood of severe heat. “The irrigation exposes more water to evaporation, leading to higher humidity in the air than would otherwise be present and exacerbating the physiological stresses of the temperature,” the study said.

At an extremely high humidity and a temperature of 35 degrees Celsius, a healthy person may not be able to survive outdoors for more than six hours. “The new study shows that under business-as-usual scenarios for greenhouse gas emissions, that threshold will be reached several times in the NCP region between 2070 and 2100,” researchers predicted.

The study is the third in a series. The previous two focused on deadly heatwaves in the Persian Gulf area and in South Asia. When looking empirically at past climate data, “Asia is what stands out,” Eltahir added.

Among the Asian countries, Japan is witnessing the worst impact of extreme weather events. The floods and heatwaves have jointly killed more than 200 people in the last month. The government estimates agricultural losses amounting to 429 million U.S. dollars.

Some 22,000 people have been admitted to hospital with heatstroke in Japan, one of Asia's largest aging economies which has witnessed a large number of senior citizens struggling to cope with the rising mercury.

Kumagaya City reeled under a temperature of 41.1 degrees Celsius, the highest ever recorded in the country, forcing the government to declare the heatwave as a natural disaster.

Similar hot temperatures have wilted millions of tons of standing crops in Europe. As a result, this year grains production in Germany, European Union’s second largest producer of grains, is likely to slump by 20 percent, the country’s farmer associations have claimed.

A similar situation prevails in the UK and Sweden. Farmers from many EU countries are demanding compensation from the government to deal with the loss. While Germany witnessed identical harsh weather conditions in 1881, UK farmers faced a prolonged heatwave in 1976.

The Swedish government has already announced a fund of 137 million U.S. dollars for farmers hit by the dry extreme weather which has also triggered catastrophic wildfires in Greece that killed 91 people. Families of the victims have sued the government for the loss of life and property.

Is climate change behind the intense heatwaves?

The National Oceanic and Atmospheric Administration (NOAA) has announced that 2018 is on the way to becoming the fourth hottest year on record after 2015, 2016 and 2017.

The average global temperature in June was the fifth highest for June in a 139-year record (1880-2018), the NOAA release said.

Alarmed by the searing temperatures in Europe, researchers from the World Weather Attribution and the University of Oxford studied the phenomenon.

They found that climate change more than doubled the likelihood of a European heatwave and these temperatures could come to be regarded as regular summer temperatures.

“What was once regarded as unusually warm weather will become commonplace – in some cases, it already has,” Dr Friederike Otto, a researcher at the University of Oxford, said. The findings revealed the planet is heating up, and in some regions, current temperatures are “unprecedented in the historical record.”

The findings, yet to be peer-reviewed, show that for the three stations further south – in the Netherlands, Denmark and Ireland – climate change has more than doubled the likelihood of the current heatwave.

“There is no doubt the present heatwave and floods are induced by climate change. There have been instances like blaming the government for inaction,” Zhang Li, a professor at the Institute of Ecology under Beijing Normal University, told CGTN.