More flooding on way - typhoons, too 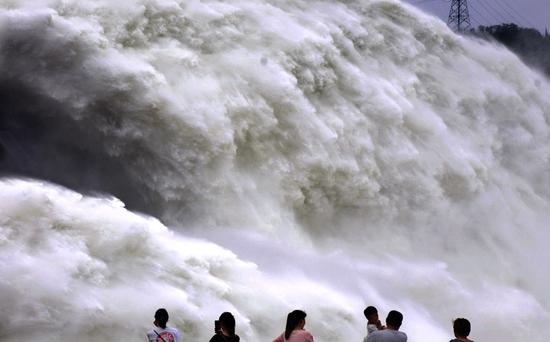 Tourists watch as water is discharged from Xiaolangdi Reservoir in Jiyuan, Henan Province, on Tuesday. The discharge will allow more room behind the dam to capture floodwaters. (Photo/Xinhua)

Major flooding in at least two rivers is possible in the coming days in China's northern region, according to the top flood control authority.

As of Sunday, floods had affected more than 8.6 million people in 18 provincial regions, leaving 41 dead. While about 660,000 hectares of farmland were flooded, 2.41 million hectares of farmland have been troubled by drought, according to the State Flood Control and Drought Relief Headquarters.

When China entered the flood season on April 12, the average precipitation in the country stood at 190 millimeters, 3 percent lower than average. But floods have occurred in more than 180 small and medium-size rivers across the country, it said.

The headquarters also said that while major floods are forecast for the Haihe River and the middle reaches of the Yellow River, regional rainstorms may also result in floods in another four rivers, including the Yangtze and its largest tributary, the Hanjiang.

The country is expected to see more typhoons this year. The first typhoon arrived 75 days earlier than last year. While seven typhoons have formed, the country will see another 21 to 23 of them in its territory, about six of which will hit the mainland, the headquarters said.

China has been in a critical stage for flood control this year with strong rainfall both in southern and northern parts of the country, said E Jingping, deputy head of the headquarters and minister of water resources, on Sunday in a conference on flood control.

He asked staff members at the headquarters to strengthen their forecasts and early warnings, especially for the Haihe, Yellow and Huaihe rivers and to prepare reservoirs for floodwater storage.

"Inspections should be conducted every day at each reservoir to ensure the water level stays below the level set for flood season. There needs to be enough space to store water brought by major floods," he said.

He also asked staff to coordinate with different reservoirs for the most efficient floodwater containment.

Based on rainfall forecasts, the headquarters has dispatched six teams to Sichuan, Gansu, Anhui, Shaanxi and Henan provinces to guide the flood-control work.

The National Meteorological Center issued a yellow alert - third from the top in a four-tier color-coded weather warning system - on Wednesday morning for rainstorms in Hubei, Henan, Anhui and Jiangsu provinces. Daily precipitation is expected to reach 100 millimeters on Wednesday and Thursday in some areas.