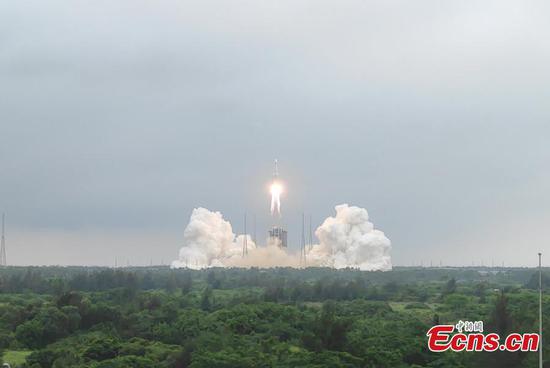 What will it be like to live and work on China's space station? Experts believe astronauts will enjoy a much better experience than their predecessors.

China on Thursday sent into space the core module of its space station, kicking off a series of key launch missions that will ultimately complete the construction of the station by the end of next year.

The airtight cabin of the core module Tianhe has three times as much space as the Tiangong-2 space lab, with three separate bedrooms and a toilet, said Zhu Guangchen, deputy chief designer of the space station system at the China Academy of Space Technology under the China Aerospace Science and Technology Corporation, at a press conference after the launch.

Tianhe is the largest spacecraft developed by China, with a total length of 16.6 meters, a maximum diameter of 4.2 meters and a take-off mass of 22.5 tonnes.

It will provide astronauts with six zones for work, sleep, sanitation, dining, healthcare and exercise.

The dining zone features a retractable dining table and equipment to heat or refrigerate food, as well as supplying drinking water, Zhu said, while a space treadmill and a space bike can be found in the exercise zone.

Thanks to the WIFI technology used in the core module, controlling cabin lighting and checking the inventory in the station will become easier for astronauts. They will also be able to make use of space-Earth communication links, including two-way video calls and e-mail messages.

To provide a safe and comfortable environment for astronauts, Tianhe is also equipped with air conditioners to ensure the air temperature, humidity and working temperature of equipment are within the appropriate range, Zhu added.

When the construction is completed, the space station will be T-shaped, with the core module at the center and a lab capsule on each side. The three-module station will offer astronauts more than 100 cubic meters of room for living and working, more than six times that of Tiangong-2 space lab.

In the station, astronauts will carry out missions including the transportation of goods and materials from the cargo spaceship, the verification of the life-support system, management of modules, and the operation of mechanical arms, said Ji Qiming, an assistant to the director of the China Manned Space Agency.

They will also conduct in-orbit maintenance, extravehicular activities and operations, as well as space science experiments and technological tests in various fields.

In preparation for their coming mission on the space station, Chinese astronauts have been conducting drills on technical training, flight procedures and mission simulation, Ji added.