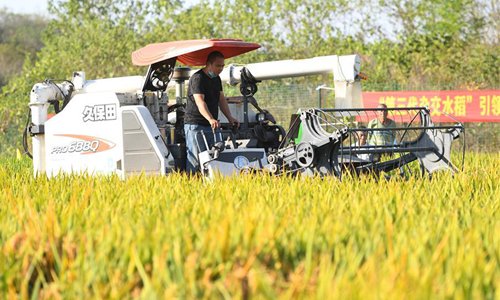 A working staff drives a tractor to harvest the third-generation hybrid rice at a demonstration base in Hengnan County of Hengyang City, central China's Hunan Province, Oct. 21, 2019. (Xinhua/Chen Zeguo)

China's third-generation hybrid rice on Monday broke the world record to become the highest-yielding double-cropping rice, which serves as a strong response to speculations of a "food crisis" in China amid the threat of COVID-19, floods, and pests this year.

China not only provided its 1.4 billion people with a safe and secure food supply, but has also actively maintained a stable supply chain of global food and contributed to global food security, analysts said.

Yuan Longping, a renowned Chinese agronomist dubbed as the "father of hybrid rice," said the output can feed five people per mu a year.

"I am more than excited," he said in English with a smile.

The latest breakthrough is of great importance to safeguarding food security in China, as the average yield is a 10-20 percent increase over current hybrid rice, Yuan said.

Many Chinese netizens gave thumbs up for the efforts and contributions Yuan has made in safeguarding China's food security over the decades. Some also said they shed happy tears while watching his interview.

Li Xinqi, a research fellow at the China National Hybrid Rice Research and Development Center, told the Global Times on Monday that the breakthrough will play an important role in safeguarding food security in China.

Not only has it increased grain output by a considerable degree, it has improved the quality of the grain as well. For example, the newly-developed rice planted on 100 million mu can feed 100 million people for an entire year, Li said.

"For the next step, our priority is to get government approval and promote it nationwide within the next one to two years. We will also apply the technology to other types of rice, or even wheat," Li said.

Amid the persistent influence of the COVID-19 pandemic, the locust plague and typhoons, some people have worried about China's food security, and some foreign media even fabricated stories with sensational headlines of China suffering from a severe food shortage.

Data released by the Ministry of Agriculture brushed off the rumors. This year's summer grain and early rice have already harvested an increase of 1.2 billion kilograms and 1.03 billion kilograms in output compared to last year.

A bumper harvest is expected with the upcoming completion of the fall grain, data suggested. The annual grain output is expected to surpass 650 billion kilograms for the sixth consecutive year.

We developed the third generation of hybrid rice with the hope of stabilizing China's total grain output, and influencing rice planting on the global stage, Li said.

"With a more mature technology, we hope that the third generation of hybrid rice will receive more recognition from the international community," Li said.

Large-scale cultivation of hybrid rice has been carried out in more than 40 countries and regions so far, with the annual planting area reaching 7 million hectares and increasing the yield of local rice by more than 20 percent.