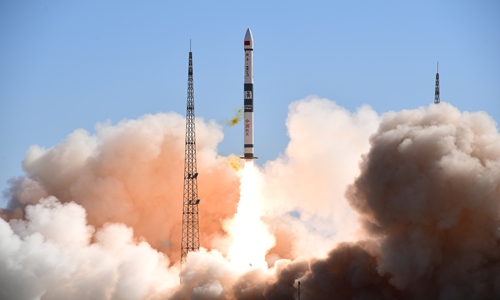 China has successfully launched the first two communication satellites for its new space-based Internet-of-Things (IoT) project into designated orbit on Tuesday, with the first one named after its birthplace Wuhan, a city once hit hard by the COVID-19, according to China Aerospace Science and Industry Corporation (CASIC), the developer.

The two satellites were launched by the country's Kuaizhou-1A commercial carrier rocket, which was also developed by the Wuhan-based Sanjiang Group under the CASIC, on Tuesday from the Jiuquan Satellite Launch Center in Northwest China's Gansu Province.

"Xingyun" project is developed by CASIC with a network of 80 low-orbit communication satellites,

The satellites will be used to test applications in multiple fields, such as intelligent container monitoring, polar environmental monitoring, meteorological forecasting as well as marine transport communication, and lay a foundation for the following space-based IoT network.

CASIC told the Global Times on Tuesday in a statement that the construction of an 80-satellite network will be completed by around 2023, and will provide a solution to current "communication blind spots."

IoT services have been strained by poor coverage of ground-based cellular communication networks that are effective by only 20 percent on the ground, and less than 5 percent at sea globally.

The Kuaizhou-1A carrier rocket that participated in the launch mission is also developed by CASIC, which is mainly used to launch 300-kilogram level satellites into lower orbits, and the solid propellant rocket model has successfully conducted 8 launch missions.

Interestingly, the Wuhan-based Sanjiang Group has named the Xingyun-2 01 satellite after Wuhan, in order to promote and celebrate the city's orderly resumption of work and production in the wake of a successful curbing of the epidemic.

The rocket body has been painted with slogans that read "Heroic Wuhan, Great China" and "Tribute to the medical workers," to honor the city, its people and all medical professionals who fought together in solidarity claiming victory in the epidemic battle.

The Global Times reporter also learned from CASIC that the Wuhan-based manufacturing complex for the Kuaizhou rocket series is near completion and in a final acceptance check stage.

The new complex will have an initial capacity of manufacturing 20 solid propellant rockets after becoming operational, CASIC told the Global Times in a statement.

The project was launched in May 2017 and was scheduled to be delivered by the end of February this year. However, impacted by the COVID-19 pandemic, the complex is expected to complete the acceptance check by May and become fully operational before the end of 2020.