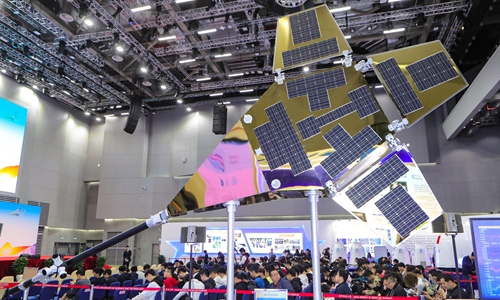 A model of Macao's first science and technology experiment satellite, which is scheduled to be launched in 2021. (Photo/China News Service)

China National Space Administration (CNSA) announced Sunday the establishment of a space exploration and science center at the Macau University of Science and Technology (MUST) which experts said will boost China's space industry to communicate with the international partners.

The center will better enable training for skilled scientists in aerospace field in Macao, enhance Macao's space science capability as well as diversifying the city's industry base.

Macao is the best choice for the CNSA, as a major State Key Lab (SKL) of MUST has been working to support the country's space programs, said Zhang Keke, director of the lab.

"We have been providing scientific research and design guidelines for space equipment, and the CNSA allocates new research projects to us. It has been a close partnership," he said.

Zhang noted that the new center will tap into broader areas of the space program, including supporting CNSA's 2020 Mars landing mission.

Under the "one country, two systems" principle, the center in Macao could become a window for China's space industry to communicate with the international partners, the director noted.

CNSA director Zhang Kejian also signed an agreement with Chief Executive of Macao Chui Sai On the same day to push for the development of Macao's first science and technology experiment satellite, which is scheduled to be launched in 2021, according to the CNSA.

The satellite will be used to observe geomagnetic field above the southern Atlantic Ocean, CNSA revealed.

The agreement was signed at the opening ceremony of a space science exhibition at MUST launched by the Macao government, the Liaison Office of the Central People's Government in Macao and the CNSA on Sunday.

Liu Liang, President of MUST, said at the ceremony that the university has been participating in data analysis and scientific research for the Chang'e lunar exploration project since 2005, and the new space exploration and science center will become a bridge of communication for Chinese and international space exchanges.

Chang Kun Hong, deputy director of the Higher Education Bureau of Macao, told the Global Times in an earlier interview that the city aims to further integrate into the Greater Bay Area plan, particularly in enhancing cooperation with Chinese mainland cities such as Shenzhen and Guangzhou in South China's Guangdong Province.

Meanwhile, some State Key Labs including a lunar and planetary sciences lab at MUST will accelerate scientific and research development with CNSA while it targets becoming one of the world's top-ranking institutes in the coming years, Chang said.

The lab, approved by the Ministry of Science and Technology of China and established in October 2018, focuses on deep-space exploration, the moon, Mars, near-Earth small bodies and gaseous giant planets, according to its official website.

Macao's students from colleaguescolleges, middle schools and primary schools are invited to visit to spark their interest in space technology and exploration, CNSA said.