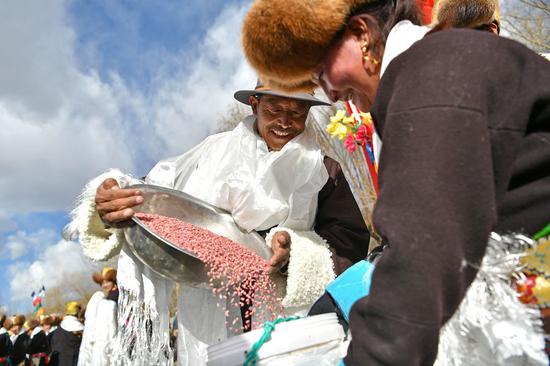 Chinese researchers have released the first high-quality genome of Tibetan people, revealing the genetic mechanism that may play an important role in human adaption to extreme environments such as high altitude.

Genome sequencing involves cutting DNA into pieces, reading the fragments and then using a computer to patch the sequence together.

Short-read sequencing technologies cut DNA into "words" that are about 100 base-pairs long. Long-read sequencing, by comparison, cuts DNA into words that are thousands of letters long, revealing parts of the genome like never before.

Structure variants (SVs) refer to the variation in the structure of an orgasm's chromosome. The researchers reported in the journal National Science Review that in the genome, they detected 17,900 SVs in ZF1, among which 6,505 are different from other East Asian SVs. The analysis found these SVs are related to the activation of molecular pathways in low-oxygen environments.

They also found that a gene named MKL1 shows large divergence between highland Tibetans and lowland Han Chinese. The difference is associated with lower systolic pulmonary arterial pressure, one of the key adaptive physiological traits in Tibetans.

Compared to other East Asian genomes, the researchers found that the Tibetan genome has more shared gene sequences with archaic humans like Neanderthal and Denisovan, noting that the unique genomic composition is associated with better lung function in Tibetans.

The researchers said that the ZF1 Tibetan genome and the identified SVs may provide valuable resources for future evolutionary and medical studies.