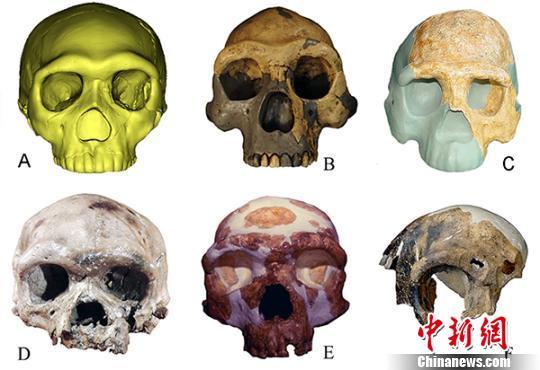 Chinese paleontologists have discovered more than 30 human fossils dating back about 300,000 years, at an excavation site in Dongzhi County in east China's Anhui Province.

They have also found more than 100 stone artifacts used by ancient humans as well as mammalian fossils of over 40 species. The discoveries are expected to shed new light on how ancient humans in the East Asia continent evolved.

The findings have been published on the Proceedings of the National Academy of Sciences of the United States of America (PNAS), a leading scientific journal in the world.

The fossils and artifacts were discovered during archaeological excavations over the past 15 years at the site, which experts believe to be a collapsed cave, said Wu Xiujie, a member of the research team and a professor with the Institute of Vertebrate Paleontology and Paleoanthropology of the Chinese Academy of Sciences.

"In the cave, we not only have discovered a large number of ancient human fossils, but also a variety of evidence of ancient human behavior, which could shed light on their lives," Wu said.

Based on testing results, the buried age of the human fossils, which belonged to 16 individuals, has been determined at between 275,000 and 331,000 years ago, around the Mid-late Pleistocene period.

The human fossils include a human skull that contains a largely complete facial structure, most of the brain cranium, and one side of the mandible.

Based on the features of the teeth, researchers believe that the skull belonged to a 14 to 15-year-old male.

The skull exhibits morphological similarities to other East Asian Middle and Late Pleistocene archaic human remains, and foreshadows later modern human forms, said Liu Wu, another member of the team and also a professor with the institute.

The site was first discovered in 2004, when mammalian fossils were accidentally collected on the surface by a local farmer.

The first excavation of the site, which was later named "Hualongdong," was conducted in the summer of 2006, yielding a partial human frontal bone, a molar and stone artifacts.

"There was a giant rock lying in front of the cave entrance. Although it hindered our excavation, we believed the rock could also act as a protector of the fossils that could otherwise have been washed away or eaten by animals," Wu said.

The removal of the rock led to the discovery of a largely preserved human skull and a substantial mammalian fossil assemblage. The human skull, heavily fossilized but well preserved within the cemented breccia, was mistaken for a bull skull in the first place.

Researchers said fossil evidence for human evolution in East Asia during the Pleistocene was often fragmentary and scattered, complicating efforts to evaluate patterns in archaic human evolution and modern human emergence in the region.

They added that the features of the Hualongdong fossils complement the study of East Asian remains in indicating an "evolutionary continuity" through the Middle Pleistocene and into the Late Pleistocene.

"What we have found in the site could just be the tip of the iceberg," Liu said. "We will continue our excavation work until the very end."

"We are planning to upgrade Hualongdong to a national cultural relic protection site, so as to better protect and study the fossils," said Yu Hui, vice head of Dongzhi County.