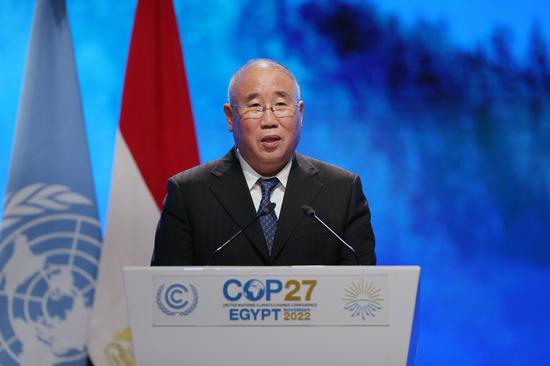 The developed countries should fulfill their promise of providing 100 billion U.S. dollars in climate finance as soon as possible and draw a road map for doubling the adaptation fund, China's Special Envoy for Climate Change Xie Zhenhua said Tuesday.

Xie, also the special representative for Chinese President Xi Jinping, made the remarks in an address to the Climate Implementation Summit at the 27th session of the Conference of the Parties (COP27) to the United Nations Framework Convention on Climate Change (UNFCCC) held in Egypt's coastal city of Sharm El-Sheikh.

Facing the grave challenges posed by the frequent extreme weather events that have caused heavy losses on every continent and by the emergence of energy and food crises this year, multilateralism, solidarity and cooperation remain the only way out of the predicament, Xie said.

Meanwhile, the principle of common but differentiated responsibilities and the mechanism of nationally determined contributions are still the "inevitable choice" to overcome the climate challenges, he said.

As the UNFCCC marks its 30th anniversary this year and the Paris Agreement has entered the stage of full implementation, the COP27 shoulders the important mission of upholding the consensus on the UNFCCC principles and promoting pragmatic actions by all parties, the Chinese envoy said.

Noting that China has been actively tackling climate change with persistent and pragmatic actions, Xie said that, with the recent successful conclusion of the 20th National Congress of the Communist Party of China (CPC), China's determination to follow the path of green development was further strengthened.

"China's firm determination and position to implement the goals of reaching carbon peak and achieving carbon neutralization, and to actively participate in global climate governance will never change," Xie vowed.

He expressed the hope that the COP27 will focus on the implementation of promises, while urging the developed countries to take the lead in exerting more effective efforts to reduce emissions so to achieve carbon neutralization significantly ahead of schedule, and achieve substantive results on the adaptation and finance issues.

China hopes that "the developed countries will fulfill their pledge of providing 100 billion U.S. dollars as soon as possible and draw a road map for doubling adaptation finance to enhance mutual trust and joint action between the North and the South," Xie said.

"We are willing to work with all parties to adhere to multilateralism, build a fair and reasonable global climate governance system with win-win cooperation, and make greater contribution to tackling the challenges posed by global climate change," he added.