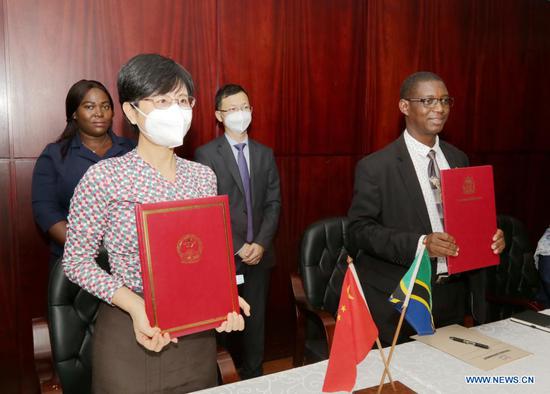 China and Tanzania on Wednesday signed an agreement on economic and technical cooperation to enhance bilateral friendship.

The agreement was signed in the commercial capital Dar es Salaam by Chinese Ambassador to Tanzania Wang Ke and Permanent Secretary of Ministry of Finance and Planning Emmanuel Tutuba on behalf of the two governments.

According to the agreement, the Chinese government will provide new gratis aid for Tanzanian mainland, which will be utilized in the construction of projects negotiated and approved by the two governments.

Speaking shortly after the signing of the agreement, Tutuba extended thanks to China for its valuable support and committed to strengthen the existing good relationship between the countries.

He said China has been supporting Tanzania in important areas such as railway infrastructure, education, health, information and communication technology and agriculture.

The government of Tanzania will take all necessary measures to ensure successful implementation of the projects to be implemented under this grant in order to achieve the intended objectives, Tutuba added.

For her part, the Chinese envoy said the agreement is a concrete action of the Chinese side to enhance the friendship between China and Tanzania and to promote bilateral economic and technical cooperation.

"China has always regarded Tanzania as an all-weather friend and a good partner," she said.

As the COVID-19 pandemic continues to wreak havoc worldwide, China stands ready to continue and offer its utmost support to Tanzania and work together with the Tanzanian side to fight against the pandemic and go through difficult times, said Wang.