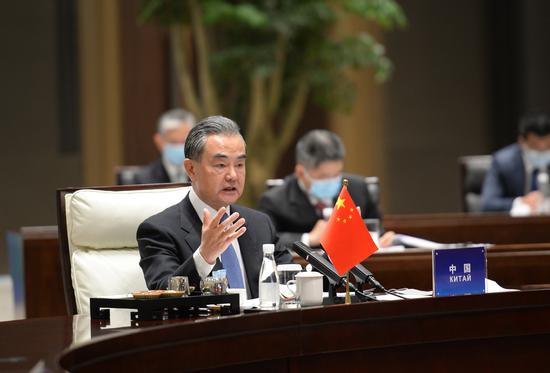 China and five Central Asian countries agreed on Wednesday to push forward the high-quality development of Belt and Road cooperation, strengthen their joint fight against the COVID-19 pandemic, promote regional security and stability and uphold multilateralism as their foreign ministers met in Xi'an, Shaanxi province.

The meeting was the first face-to-face one under this mechanism since the first meeting of the foreign ministers of China, Kazakhstan, Kyrgyzstan, Tajikistan, Turkmenistan and Uzbekistan was held via video link in July.

Given the current pandemic situation, it showed the six countries' confidence in jointly combating the virus and their resolve to strengthen unity and coordination, Wang said.

China and the five Central Asian countries have injected impetus into regional economic recovery and made solid contributions to regional peace and development, Wang said, adding that their cooperation is promising and enjoys broad prospects.

To build a community of health for all, Wang said at the meeting, China stands ready to set up a reporting system on major epidemics with participating parties as soon as possible and will actively consider providing a new round of vaccine assistance to Central Asian countries.

The state councilor said that China will promote cooperation with the five Central Asian countries in areas including trade, modern agriculture, industrial modernization, high-technology sectors and localities in order to make this area a pilot zone in the joint building of the Silk Road Economic Belt.

To help cultivate high-quality professionals for the five Central Asian countries, Wang announced that in the next three years, China will provide an additional 450 scholarships for students from those nations and will help establish five Luban Workshops, which provide state-of-the-art technical and vocational training.

He stressed the importance of maintaining opening-up, calling for efforts to ensure the smooth operation of China-Europe freight trains, accelerate discussions on transnational railway construction and facilitate customs clearance.

China is willing to share its poverty alleviation experience with Central Asian countries and will formulate training programs on benefiting farmers through poverty relief for those countries, Wang said.

They said their countries are ready to promote the alignment of the Belt and Road Initiative with their own national development strategies, strengthen cooperation with China in various fields including agriculture and fighting the pandemic, and jointly crack down on terrorism and transnational crimes.

The ministers expressed their support for China in safeguarding its national sovereignty and territorial integrity and said they hoped to strengthen coordination with China within multilateral frameworks including the United Nations.

Three joint statements were released after the meeting on dealing with COVID-19, deepening cooperation between local governments and the Afghan issue.