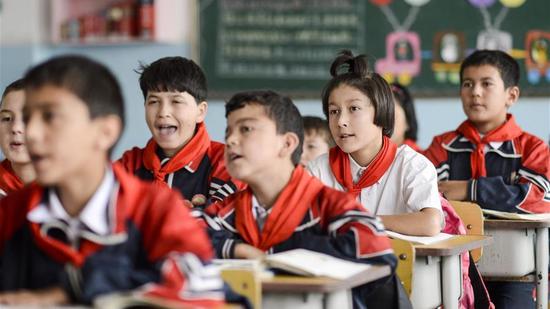 The U.S. government's "genocide" accusation against China was based on data abuse and false claims of a right-wing religious extremist, according to an investigation piece on the independent news website Grayzone on Feb. 18.

It indicated that the U.S. government's so-called "genocide" accusation against China stemmed from a single source: a paper by German far-right ideologue Adrian Zenz in June 2020.

"A careful review of Zenz's research shows that his assertion of genocide is contradicted by flagrant data abuse, fraudulent claims, cherry-picking of source material, and propagandistic misrepresentations," said the piece.

Zenz argued that population control measures applied to Uyghurs could be branded as "genocidal" because population growth rates fell by 84 percent in the two largest Uyghur prefectures between 2015 and 2018, and declined further in several minority regions in 2019, noted the piece.

Zenz also defamed the expansion of public healthcare services in Xinjiang as evidence of genocide, said the piece. He misinterpreted a photograph of Uyghur residents receiving medical consultation at a free health clinic as part of an "effort to enforce the thorough implementation of increasing intrusive birth control efforts".

The photograph, however, originally from an article in China News, depicted a regiment from the Xinjiang Production and Construction Corps deploying to a rural province as part of the government's poverty eradication program.

The doctors "measured blood pressure, electrocardiogram, blood sugar, height and weight for poor villagers who came to see the doctor for free… More than 200 poor people were diagnosed and treated, and more than 100 common drugs were distributed on the spot", said the article.

The report criticized "mainstream Western outlets like the AP, BBC and CNN" for having "for accepting Zenz' dubious research as absolute fact," while "ignoring his background as a religious extremist who is ideologically committed to regime change in Beijing".

Portrayed as a "China scholar" by Western media, Zenz was indeed a far-right Christian fundamentalist currently serving as an analyst at the Jamestown Foundation, a neoconservative think tank in Washington.