This is why Hong Kong people support improving electoral system

Running a small cafe alone in Hong Kong, single mother Kate Lee found the thing that depressed her most was not the COVID-19 outbreak but the endless political upheavals.

After speaking out against the violence in a pro-police rally in 2019, Lee became a target of vicious online attacks and hateful telephone calls. Frequent bogus complaints made about her cafe also dealt a heavy blow to her business.

As social unrest and COVID-19 delivered a double whammy to Hong Kong's economy, Lee, like many people struggling amid the epidemic, pinned high hopes on the fast rollout of government subsidies so that her 40-square-meter eatery could stay afloat. 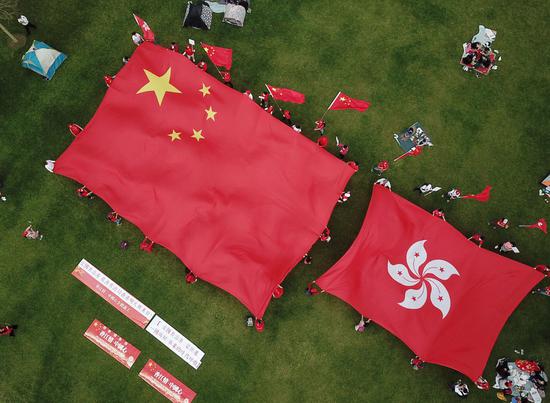 So, when she heard that opposition lawmakers filibustered repeatedly to block the second round of the anti-epidemic fund during a Legislative Council (LegCo) session on April 17, 2020, she felt devastated and left adrift.

"They just opposed (the bill) for the sake of opposing (it)," Lee exclaimed.

Starting in October 2019, the House Committee of the LegCo of the Hong Kong Special Administrative Region (HKSAR), which prepares legislative work for full-council meetings, was brought to a standstill for over six months due to malicious filibusters and violence by opposition lawmakers.

The stalled legislative process led to an enormous backlog of bills that directly concern people's livelihoods, from tax breaks to housing, which were of paramount importance amid the epidemic.

Last summer, Benny Tai Yiu-ting and others, colluding with external forces, attempted to rig the seventh-term LegCo election and assist candidates advocating "mutual destruction" to grab more than half the seats through electoral loopholes.

If successful, they would have indiscriminately vetoed all major government bills to paralyze the executive authorities and force Chief Executive of the HKSAR Carrie Lam to step down. 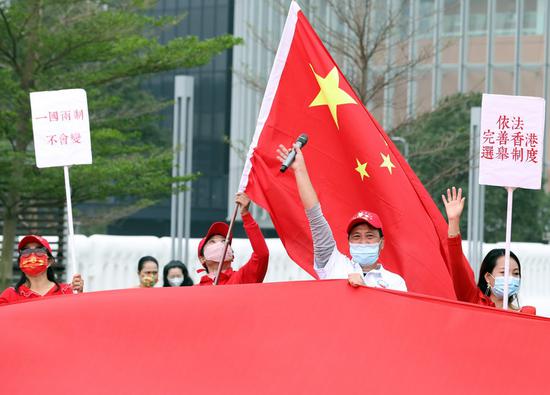 As escalating political turmoil cast a dark shadow over the financial and commercial center, the collective desire for restoring a stable political and social environment was on the rise.

Nicholas Muk, 29, a teacher at the Pui Kiu Middle School in the Eastern District, witnessed how street violence and political instability had impacted schools and young people in recent years and could still feel the pinch, even now.

"I saw classes suspended, campuses maliciously politicized and minors involved in the disturbances during that time," he said, calling for a stable environment for education so that his students can keep their minds on studying and developing healthy values.

The voice of the Hong Kong people was heard.

During the ongoing fourth annual session of the 13th National People's Congress (NPC), China's top legislature, national lawmakers are deliberating a draft decision on improving the electoral system of the HKSAR.

The riot and turbulence that occurred in the Hong Kong society reveals that the existing electoral system in the HKSAR has obvious loopholes and deficiencies, Wang Chen, vice chairman of the NPC Standing Committee, said when introducing the draft decision last week.

Anti-China, destabilizing forces and radical localists used the HKSAR's electoral platforms and the deliberation platforms of the LegCo and the District Councils, or their position as public servants, to blatantly carry out anti-China and destabilizing activities, Wang said.

Necessary measures must be taken to improve the electoral system and remove existing institutional risks to ensure Hong Kong is administered by Hong Kong people with patriots as the main body, he said.

According to a survey conducted by the think-tank Bauhinia Institute, more than 80 percent of local people recognize the necessity of upholding the "patriots administering Hong Kong" principle and nearly 70 percent support the central authorities in improving Hong Kong's electoral system and closing institutional loopholes.

Over the past weekend, Muk and his friends set up an opinion poll station in Wan Chai and were overwhelmed by the numbers of people flocking to express their support. "More than 200 passersby stopped and signed their names in support of the NPC decision within one hour," he said.

When the NPC session concludes on Thursday, the national legislature is expected to officially make the decision on improving the HKSAR's electoral system and authorize its Standing Committee to amend Annex I and Annex II to the Basic Law of the HKSAR in accordance with the decision.

After the amendment at the state level is completed, the HKSAR will amend relevant local laws accordingly. 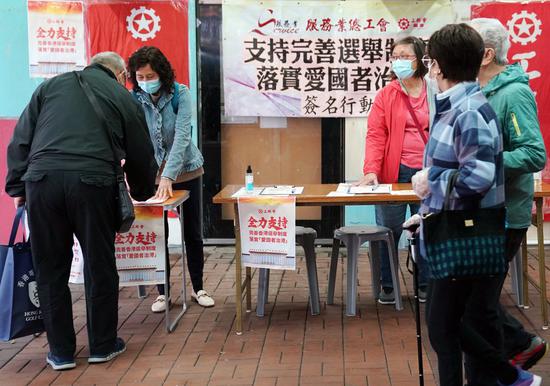 A citizen signs at a street counter in support of improving the electoral system of the Hong Kong Special Administrative Region (HKSAR) and implementing the principle of "patriots administering Hong Kong" in Hong Kong, south China, March 7, 2021. (Xinhua/Li Gang)

Various sectors in Hong Kong have agreed that the improvement in the electoral system will enable Hong Kong to right the wrongs and usher in a new, brighter phase.

Lau Siu-kai, vice president of the Chinese Association of Hong Kong and Macao Studies, said Hong Kong society will be allowed to refocus on economic development and promote the steady and sustained implementation of "one country, two systems."

As violent incidents and the epidemic dealt a one-two punch to Hong Kong's businesses, an improved electoral system will help the LegCo resume normal operation and the HKSAR government carry out policies to improve people's livelihoods, Lo Kam-yam, president of the Hong Kong Commerce and Industry Associations, said.

After that, a sound business environment will be restored and residents will, once again, be able to lead a stable life, Lo said.