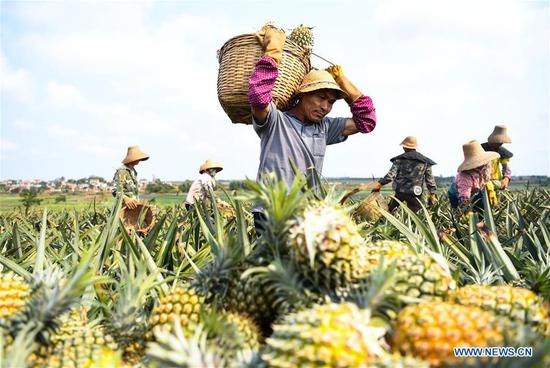 The General Administration of Customs on Feb 26 suspended imports of pineapples from Taiwan to prevent the fruit from bringing pests to the Chinese mainland.

The ban aims to cut the risk of plant-based epidemics as since last year, mainland customs repeatedly found quarantine pests in pineapples imported from Taiwan.

However, instead of plugging their food safety loopholes, Taiwan's ruling Democratic Progressive Party politicized the issue, saying the move is suppression from the mainland against Taiwan.

By deliberately distorting the facts and overhyping the "pineapple pest" issue, the DPP is seeking to achieve its political goals through fanning hatred and anti-mainland sentiment.

The island leader Tsai Ing-wen and her administration have along been pushing its "Taiwan-independence" agenda, especially through serving as a pawn of the United States to contain the peaceful rise of the Chinese mainland, which has undermined China's sovereignty and core national interests and jeopardized the peaceful development across the Taiwan Straits.

With the risk of the cross-Straits conflict growing, the DPP has not only triggered public discontent in the island, but also annoyed the U.S. administration who is reluctant to be dragged into a cross-Straits war.

The DPP is well aware that it will be unable to continue its rule over Taiwan if it fails to resolve the security issue of Taiwan by resuming dialogues with the mainland.

Thus, it took advantage of the pineapple issue to shift its responsibility of failing to resume the dialogues and to fan hatred and anti-mainland sentiment.

Moreover, the DPP tries to distract public attention from its declining approval rating as a result of its recent controversial moves.

Last year, the DPP lifted the ban on imports of U.S. pork containing feed additive ractopamine in disregard of the health of Taiwan residents. It also shut down CTi News, a cable news channel which has clearly spoken out against "Taiwan independence". The decision has been viewed by the public and many insiders to be politically motivated.

The Tsai administration's approval rating dropped sharply due to these controversial moves. To reverse the decline in approval rating, the DPP hyped the pineapple incident to divert public attention.

Despite its failure to boost Taiwan's economy since its founding more than three decades ago, the DPP has effectively transformed the ideology of the island and has surpassed the Kuomintang Party to become the dominant political party in the domain of ideology, with nearly 70 percent of the island's population supporting its cross-Straits policy.

Despite the wide support, most of the people in favor of Tsai Ing-wen and "Taiwan independence" are afraid of a cross-Straits conflict and don't want to eat pork containing ractopamine to please U.S. politicians, which are the reasons behind Tsai's declining approval rating.

To pull itself out of the trouble, the Tsai administration deliberately portrayed the pineapple incident as suppression from the mainland to provoke anti-mainland sentiment.

The author, Tang Yonghong, is a professor at the Taiwan Research Center of Xiamen University.