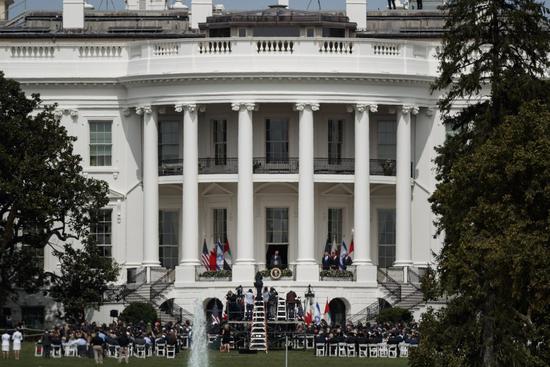 Photo taken on Sept. 15, 2020 shows the signing ceremony of normalization agreements between the United Arab Emirates and Bahrain with Israel at the White House in Washington, D.C., the United States. (Photo by Ting Shen/Xinhua)

Israel signed on Tuesday normalization accords with the United Arab Emirates (UAE) and Bahrain, but Palestine claimed they will not achieve peace in the Middle East.

The signing ceremony formally makes the UAE and Bahrain the third and the fourth Arab nation to establish diplomatic ties with Israel after Egypt and Jordan.

Trump touted the historical significance of the accords by calling them "peace deals" and "the dawn of a new Middle East."

The UAE and Bahrain, however, have never fought a war against Israel in history, and the unofficial relationship between Israel and the two Arab states have developed for years.

Netanyahu hailed the normalization agreements as "a pivot of history" that heralds new dawn of peace, saying Israel, the UAE and Bahrain are eager to invest in a future of partnership, prosperity and peace.

"It is now incumbent on us to work urgently and actively to bring about the lasting peace and security our peoples deserve, a just, comprehensive and enduring two-state solution to the Palestinian-Israeli conflict will be the foundation, the bedrock of such peace," he said.

Sheikh Abdullah of the UAE in his remarks expressed thanks to Netanyahu for halting the annexation of Palestinian territories, calling it "a decision that reinforces our shared will to achieve a better future for generations to come."

Netanyahu, however, said last month the annexation plans had only been delayed but still "on the table."

The signing demonstrated that the Trump administration is eager to showcase its foreign policy achievement and gain support with pro-Israel evangelical Christians for the upcoming presidential election, analysts say.

"The timing of this is explained by the fact that it's designed clearly to boost a beleaguered president's chance for reelection," said Aaron David Miller, a Middle East expert at Carnegie Endowment for International Peace.

Jon Alterman, director of the Middle East Program at the Center for Strategic and International Studies, said Tuesday's signing did bring the beginning of a new era in the region, but it is not clear that the era will be one of greater peace.

"In the near term, it may be an era of greater volatility," he cautioned. "Less pan-Arab cooperation, combined with a U.S. determination to lighten its footprint in the region, is likely to create different regional dynamics."

In response, Palestine said the signing of the three-way normalization accords will not achieve peace in the Middle East.

In a statement, the Palestinian presidency said that "all attempts to bypass the Palestinian people and their leadership will have serious consequences," stressing that the U.S. administration and Israeli authorities will bear the responsibility.

Palestinian President Mahmoud Abbas called on all Arab countries to abide by the 2002 Arab Peace Initiative that stipulates the Arabs can only normalize relations with Israel after the Palestinian issue is resolved.

It remains unclear if other major countries in the Middle East, notably Saudi Arabia and Qatar, will join the normalization process.

Arab League (AL) Secretary-General Ahmed Aboul-Gheit stressed the recent regional developments wouldn't impact the Arab consensus over the inevitability of ending the Israeli occupation of Palestinian territories as an essential condition for achieving comprehensive justice and peace in the Middle East.

But Alterman thought otherwise. The Israeli-UAE-Bahrain breakthrough was "a collapse of Arab solidarity on the Palestine question that had been in place for three-quarters of a century," he noted.

"Without progress, let alone a settlement of the Israeli-Palestinian issue, it's going to be hard to describe this or even hope this is going to lead to a comprehensive peace in the Middle East," said Miller.

"For Israel, these agreements achieve a strategic goal of recognition in the Arab world," said Ehud Eiran, a visiting scholar of the Department of Political Science in Stanford University. "This is highlighted by the fact that it was achieved without the Palestinians."

The accords mark a major change from the traditional view held for decades that Israel must first solve the conflict with the Palestinians and only then can agreements be reached with its Arabs neighbors, according to him.

As the accords were being signed in Washington, rockets were fired into Israel from the Hamas-controlled Gaza Strip, injuring two people. Hundreds of Palestinians protested against the normalization deals with Israel ahead of the signing ceremony.