'Cover-up,' a label China shall return to the White House 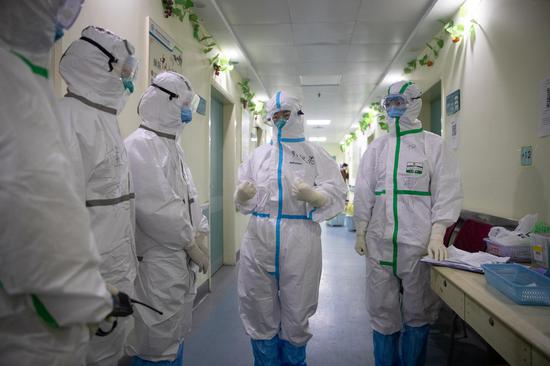 China is winning its war against the novel coronavirus which scientists say is natural in origin, but the country has to battle another "political virus" that is viciously manipulated by U.S. politicians.

China is seeing a spike in travelers during the May Day holiday, a positive sign of public confidence in the progress in combatting COVID-19 after months of arduous nationwide efforts. While the achievements serve as a signal and encouragement for the world that the epidemic can be overcome, the U.S. administration sharpens its rhetoric on China.

Some U.S. politicians have suggested that China should be held accountable for the global pandemic, accusing China of covering up information about the outbreak.

However, this "cover-up" label should be put on the U.S. administration as its incapability in handling the disease is clear for all to see. The time of smearing China should have been spent on better controlling its domestic epidemic situation.

In the narrative of U.S. politicians fanning anti-China flames, Zhang Jixian, the doctor who first alerted the medical system of the novel coronavirus in late December in the city of Wuhan, Hubei Province, has been seldom mentioned.

On Dec. 27 last year, Zhang, director of the respiratory and critical care medicine department of the Hubei Provincial Hospital of Integrated Chinese and Western Medicine, filed a report to the hospital, which soon submitted it to the district-level center for disease control and prevention.

"The report is about us discovering a viral disease, probably infectious," Zhang told Xinhua.

The virus came all of a sudden and knowledge of it was scarce back then. No one knew the exact source and transmission route at the very beginning.

The Wuhan Municipal Health Commission on Dec. 30 sent out an urgent notification about an outbreak of pneumonia of unknown causes in the city. The National Health Commission dispatched a working group and an expert team in the wee hours of Dec. 31 to Wuhan to guide epidemic response and conduct on-site investigations.

The country was quick to share information with the world, too. Since Jan. 3, China has been regularly informing the World Health Organization (WHO) and relevant countries, including the United States, on the latest development of the situation. On Jan. 12, China shared with the WHO information on the genome sequence of the novel coronavirus, which has laid a solid basis for global efforts of scientific research and vaccine development.

China has taken the most comprehensive, strictest and most thorough prevention and control measures to battle the epidemic. The government has always stressed that epidemic information must be reported in time and released in an open, transparent and truthful manner.

On April 17, Wuhan, which was hardest hit by the coronavirus outbreak, revised its numbers of confirmed cases and fatalities in the city to include those that were previously uncounted.

Due to the insufficiency in admission and treatment capability in Wuhan in the early period of the outbreak, a few medical institutions failed to connect with the disease prevention and control system in time, while hospitals were overloaded and medics were overwhelmed with patients. As a result, belated, missed and mistaken reporting occurred, according to an official of the Wuhan municipal headquarters for COVID-19 epidemic prevention and control.

The revision demonstrated once again China's respect for every single life and its adherence to facts.

China's control measures worked. The U.S. politicians, however, are not willing to admit that China has managed to curb the epidemic in a relatively short time.

When it only takes a straightforward comparison of the death tolls to understand the U.S. administration's awkward performance in handling the disease, the Washington politicians beefed up their "China cover-up" theory.

China has put the achievement of its COVID-19 fight to the test of time and the people.

The country will start the annual sessions of the national legislature and top political advisory body in May. Such courage and action is a confident reply to those who doubt China's anti-virus success, as the large-scale gathering in Beijing requires all-out efforts to ensure no epidemic resurgence.

The government's judgment on the situation of epidemic control has been endorsed by the public, as shown by the work resumption and the spike in tourism.

In April, the number of tourists who made online bookings has quadrupled from March, according to Trip.com Group.

On Friday, the first day of the May Day holiday, 7,394 trains were in operation in China, carrying 7.37 million travelers, a record daily high since the Lunar New Year, according to the China State Railway Group.

Data from the National Bureau of Statistics showed that 98.5 percent of China's large and medium-sized enterprises had resumed production as of April 25.

China's reopening of its economy has preconditions that the safety of life is guaranteed, in sharp contrast with the U.S. administration which pushed to relax the country's shutdown even as coronavirus deaths remained high, leading to some public health experts reminding Americans of exercising proper social distancing.

WHO IS REALLY COVERING UP?

When China struggled to fight the virus, the alarm bells kept ringing to the world. But the U.S. administration seemed to care more about its political agenda than public health, without telling the public the truth about the severity of the disease.

Some experts shared the view that the nearly two-month time window won by China was squandered by the U.S. politicians because of misjudgment and insufficient preparation. China's warnings have fallen on deaf ears.

To shift public criticism, they adopted the old tactic of blaming others and even resorted to conspiracy theories.

Richard Horton, editor-in-chief of The Lancet medical journal, said the conspiracy theory could undermine the global response to the virus. "It is very important to understand the origins of the virus, study those origins scientifically and not to allow such conspiracy theories to contaminate our thinking."

While the smearing attacks against China and other targets to distract attention continue, the real image of an incompetent administration has been clear to the world.

"The United States needs to ask their president for the truth," a Twitter user named "archie" said, commenting on a short animation titled "Once Upon a Virus" that briefly compared China's proactive epidemic response with the U.S. administration's indifference and inactivity.