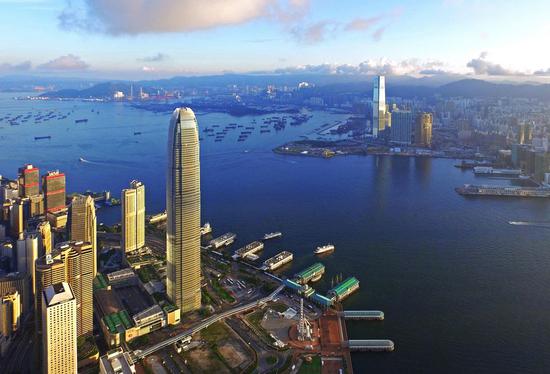 As the district council elections of China's Hong Kong Special Administrative Region (HKSAR) draw near, candidates are pulling out all the stops to secure a win. But the increasingly violent social turmoil is causing growing concerns about whether the election can still proceed in a safe and orderly manner.

Junius Ho, an HKSAR lawmaker running for the re-election in district council of Tuen Mun, was stabbed in the left side of his chest by a male in his election campaign event near Richland Garden, Tuen Mun, on Wednesday morning.

Ho was sent to hospital and fortunately not in a life-threatening condition. Two of Ho's colleagues sustained injuries in hands and arms.

In a statement released on Wednesday, the HKSAR government condemned the attack and stressed such violent acts must not be tolerated.

Hong Kong has always been diverse and inclusive, and residents should remain peaceful and rational, and respect each other when expressing opinions, according to the statement.

The attack came as the latest evidence that violence has posed a major challenge to the upcoming elections on Nov. 24.

An increasing number of candidates have suffered varying degrees of threats, doxxing and online bullying ahead of the polling day, highlighting the urgency of ensuring a safe, clean and peaceful election.

The Independent Commission Against Corruption (ICAC) said last week that by the end of October, it has received 77 complaints in relation to the district council election, of which 28 cases involved use of force or duress against candidates.

Starry Lee, chairwoman of the Democratic Alliance for the Betterment and Progress of Hong Kong (DAB), said the fairness of the elections was seriously jeopardized as many candidates from the political group suffered from various degrees of harassment from besieging to setting fires.

In fact, during past election run-ups in the HKSAR, it has been customary for candidates to display campaign posters on the premises of shops with the consent of the proprietor. This year, things have changed. Shop owners, despite their willingness, fear that they might fall victim to violent demonstrators who would assault people with different views or their shops would be boycotted.

On top of that, violent protesters also take to instant messaging service Telegram and online forum LIHKG, inciting cyberspace violence and abusing candidates and their families on the Internet. The platforms are currently extensively utilized by violent protesters for online bullying and the spread of misinformation.

These disrupting acts have raised increasing awareness of the Hong Kong society for an immediate halt to all forms of violence in order to hold a peaceful and reasonable election.

A spokesman for the Electoral Affairs Commission has issued a statement calling on everyone to exercise restraint and not to resort to violence. "We urge everyone to cherish the district council election, which is a very important platform, and not to sabotage the long-standing good election culture in Hong Kong," he noted.

The spokesman underscored that although their staff have devoted themselves fully to preparing for the election, all people in Hong Kong must work together to ensure holding the election "in a peaceful, orderly, fair and open manner."

In late October, former legislator Wong Kwok-hing, together with 10 other representatives from a broad range of sectors, set up a concern group to urge the HKSAR government to end violence and chaos, restore law and order and take the necessary measures to guarantee the election takes place safely and fairly.

The concern group has said that many councilor's offices or places where they serve the community have been repeatedly vandalized by rioters. Some candidates and volunteers have suffered varying degrees of intimidation, and their personal safety is under threat. Meanwhile, online communities are flooded with bullying and false fabrications, where a large amount of misleading information is provided.

More and more citizens are standing out in support of bringing reason and peace back to Hong Kong as the election is imminent. "It doesn't matter what political stances you hold, but once you block roads, commit arson or vandalize public facilities, then it is absolutely wrongdoing," said a local resident surnamed Au.

Another person who gave only her surname Chan said she had concerns that the black-clad violent protesters would intimidate or beat people who go to polling stations. "People in my neighborhood told me they dare not go out to vote if they (rioters in black) show up around our community on the polling day," she said.

The concern group said in a statement that Wednesday's attack was premeditated, organized and planned, urging for all necessary measures to protect the upcoming election.

The DAB will meet with HKSAR government officials for measures to ensure a safe and fair environment, Chairwoman Lee said.

Wong Kwok-kin, vice chairman of the Hong Kong Federation of Trade Unions, said he hoped the knife attack incident will entail efforts to guarantee the safety of election candidates.

A total of 1,090 validly-nominated candidates will compete for 452 seats in 18 districts in the 2019 District Council Ordinary Election scheduled for Nov. 24. More than 600 ordinary polling stations and 23 dedicated polling stations will be open for about 4.13 million registered electors, according to the Registration and Electoral Office.